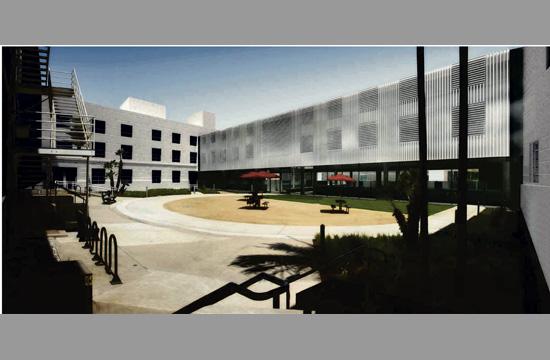 As small as the City of Santa Monica may be in land area, many essential functions of the local government are spread out over a wide area. After multiple efforts over the years of trying to consolidate all of the town’s operations onto the City Hall campus, council members took one step closer toward that goal on March 27 in adopting a policy to look into potential design plans for a Civic Center expansion.

Should the policy be realized, City Hall hopes to establish more efficient work proximity for Santa Monica’s government administration while also cutting down on the cost of office leases as part of the Civic Center Specific Plan.

A proposed expansion location just east of City Hall would house up to 40,000 square feet of office space, allowing most of the administrative services not located in the Civic Center to be relocated there.

The new building, which, according to the staff report, would be three levels, would provide sufficient space to accommodate a large number of off-site staff, currently in lease spaces, to work in a City-owned structure with City Hall adjacency.

According to Public Works Director Martin Pastucha, there are multiple departments operating outside of the City Hall campus, including the Office of Sustainability and the Environment, the Finance Department, and the Housing and Economic Development Department, among others.

“For years, the City has tried to consolidate off-site staff that are at various locations outside,” Pastucha said, adding he saw the execution of the Civic Center Specific Plan as an ideal opportunity to centralize Santa Monica’s as much of Santa Monica’s governmental and administrative functions at the Civic Center as possible.

The proposed plan would also allow stakeholders to conduct City business in one location instead of traveling to multiple locations.

With the council’s approval on March 27, staff will now explore preliminary design plans and develop a financial analysis of the potential expansion.

The design plans would cost City Hall about $500,000 and be complete by this summer. Council would review the initial design recommendations as early as the fall.

A proposal that would have called for the expansion along the “North Slope” between the current City Hall location and the Santa Monica Freeway was determined to no longer be viable.

The City has sought to consolidate its administrative functions at the Civic Center since 2001.