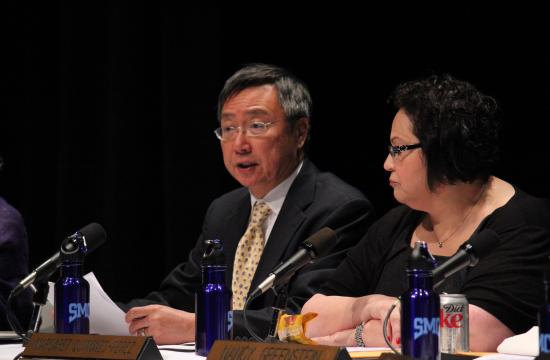 Spring Break couldn’t have come at a better time this week at Santa Monica College following the pepper spray incident last Tuesday that affected dozens and sent a handful of students to the hospital.

More than 100 students were protesting a pilot “self-funded” supplemental program that would have offered an additional 50 courses at SMC this summer. When students attempted to enter the at-capacity SMC Board of Trustee meeting, campus police deployed pepper spray into the overcrowded hallway outside of the meeting room. The incident gained national media attention and raised awareness on the reality of the community college budget cuts across the country.

At SMC’s Board of Trustees “special meeting” last Friday, students were divided over the pepper-spraying incident, which was seen in the fragmentation of the student body with multiple Associated Student Body resignations.

Dr. Chui L. Tsang, President of SMC, remained positive, saying he was “pleased with the board’s support” of his recommendation last Friday to “delay” the controversial two-tier plan to introduce additional classes in summer.

“It gives the college some time to delve deeper into this program, and into the support and usefulness of this program to the students,” Tsang said.

The pilot program, originally approved by the Board in March, would have offered about 50 extra “self-funded” classes at SMC’s “actual cost” this summer, which is $180 per credit unit, or $540 for a typical three-unit course. Typical state-subsidized classes usually cost $46 per credit unit for California residents.

Louise Jaffee, a Santa Monica College Trustee, said she thought the Board of Trustees meeting on Friday went as well as it could.

“We heard from some people who were more supportive and had a larger view and at least appreciated what we were trying to do,” Jaffe said after the meeting.

Yet a rift amongst students holding opinions in support and against the two-tier program was apparent.

On Friday, Academic Support Director William Sun, a member of the ASB staff, submitted his resignation along with Student Budget Management Director Yian Chen. They cited their resignations were mainly due to the fact they did not like how ASB President Harrison Wills and ASB Vice President Jasmine Delgado had used their influence over the school to “escalate” student protests against the two-tier plan.

Sun, who took Tsang’s side in support of the controversial plan to raise tuition to help fund needed classes, was booed at Friday’s Board of Trustees meeting when he introduced himself as part of the student body.

Sun had verbally announced his resignation on Thursday at an emergency ASB meeting after he showed support for Director of Publicity DJ Davids, who ASB President Harrison Wills attempted to impeach.

Yet as Sun pointed out to The Mirror, he said he had a right to introduce himself as an active member of the ASB governing body and had a right to represent the student body as he hadn’t submitted his resignation letter.

“I have not signed anything,” said Sun after the Board of Trustees meeting.

Davids, who did not resign despite attempts of the ASB student body to impeach him, retained his student position of Director of Publicity and will continue in that role until the end of the school year.

“I’m for contract education because it offers students a solution to not having enough classes,” Davids said. “Right now, as everyone knows, the state budget is completely thrashed and Santa Monica College is doing their best job to get all the classes that students have been asking for. I think this supplemental program will help students get the classes they need. SMC doesn’t have the resources to offer the regular low price classes so they are just doing what they can with what they are given.”

But according to Jasmine Delgado, the two-tier system is “wrong.”

Delgado said she believed the only way to correct this “wrong” was to retract support of the two-tier system, make the public aware of this issue, and protest in order that her message of change be heard in her community and Sacramento.

“We have to mobilize the citizens of California,” Delgado said. “We have to understand that if Jerry Brown’s tax initiatives do not pass in November, not only will Santa Monica be in a deeper financial crisis for public education, but every single public education system in California will be.”

ASB Commissioner Louis Gomez, who comes from a Latino family and who uses the bus to commute to school every day from Burbank, believes that many Latinos “do not have the same socioeconomic background that many other students do,” and that the current economic climate is hindering their growth as positive contributors to society.

“Latinos are usually closer to the bottom rungs of the socioeconomic status,” Gomez said. “Contract education is inherently disenfranchising them as a result of having multiple tiers in which students who can afford it will pay out of pocket and those who can not afford it yet have need will have to take loans, and that will further disenfranchise Latinos as members of the community.”

Santa Monica Mayor Richard Bloom said he agreed with the students and the administration at SMC that changes need to happen in order to salvage the Santa Monica economy, make it prosperous again, and put the entire state of California-that currently has a 12 percent unemployment back on the right track.

“The administrators of SMC are facing an impossible situation and the students are rightfully angry about it,” Bloom said. “The whole damn thing is unfair. It’s unfair that higher education has suffered through 25 percent budget cuts. I’m not going to claim that I have the magic formula, but I think its going to take a few things and it may be tough while we get back on our feet. I think one or both of the ballot measures will provide some help.”

The upcoming ballot measures Bloom referred to are the Molly Munger Tax and the Millionaire’s Tax initiatives that, if passed this November, would reform the California tax code.

In a nutshell, the Molly Munger tax would up taxes for some of the richest people in order to help fund other portions of public education, namely K-12. The Millionaire’s Tax initiative would raise taxes on the wealthiest 2 percent of Californians in order to raise revenue for all public education, prevent a number of hospitals from closing, and save thousands of jobs.

According to a Millionaire’s Tax official press release, the new measure would, “prevent draconian cuts from occurring and will send a signal that the people of California want to fund education and vital services.”

Bloom said he believed this tax would create technology jobs in Santa Monica that could utilize technological proficient SMC students, as well as other students from public education institutions from around the state, who would then have access to study in these classes and be part of the solution to help lift California out of its current budget crises.

But Bloom is worried that if the tax codes do not pass, many technology companies based in California may decide to leave and move elsewhere.

“I have been talking to tech companies that have been landing here the last couple of months, and as they grow and get bigger, there is a need for more call centers,” Bloom said. “I hope they don’t leave Santa Monica and go somewhere else.”

Bloom, who is running for the 50th Assembly District, called on State leaders and the voters to make some tough decisions in order to provide a spark to the California economy and rebuild it in order to reshape California into its rightful role as a prosperous state in the nation.