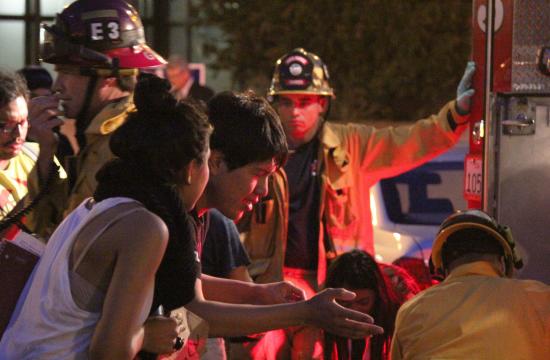 The full statement from Tsang is published in full below.

According to reports, a third person having difficulty breathing was also taken to a hospital, but it was not immediately clear if this person was among the protesters.

More than 100 students sought to disrupt a Board of Trustees meeting being held Tuesday evening.

Firefighters were called to the campus at about 7:20 p.m.

The students were protesting a two-tiered system of fees due to go into effect in summer that would significantly increase the cost of attending the college.

SMC Board of Trustees President Chui Tsang has proposed a new program that would offer certain core classes such as English, history, math, and biology at a rate of $180 per unit.

Reactions from the many students has been of disconcert and reluctance.

The Student Organizing Committee is demanding that SMC President Tsang and the Board conduct a campus-wide referendum on “Contract Education” to determine if it should be implemented.

“We feel poorly represented,” said student Candice Yamaguchi. “If they (the senior administration and Board of Trustees) feel that this is beneficial to our campus they should involve the students, democratize this process and come to consensus. The students need to remain organized and educated.”

Over the past 3 years, the Student Organizing Committee claim more than 1,000 classes have been cut from the course list, including 100 classes that were cut this past semester.

Samaria Gomez, student and Outreach Director of IDEAS (Improving Dreams Equality, Access, and Success), said education has been under attack for a long time.

“Minorities and students from lower socio-economic backgrounds are being dismissed and excluded,” Gomez said. “It’s on the SMC website under ‘Advance your Dreams.’ This will not help advance our dreams, it’s only going to hold our dreams back.”

At approximately 7:15 p.m. on Tuesday, April 3, 2012, an incident occurred at Santa Monica College involving a group of approximately 100 demonstrators at a regularly scheduled SMC Board of Trustees meeting.

When some of these demonstrators used force to enter the Board Room proper, and had overrun the door and the personnel stationed at the door, there was one discharge of pepper spray used by a SMC police officer to preserve public and personal safety. Unfortunately, a number of bystanders, including college staff, students and other police personnel were affected.

Although a number of participants at the meeting engaged in unlawful conduct, Santa Monica College police personnel exercised restraint and made no arrests. Unlawful conduct included setting off fire alarms and attempting to disrupt the Board of Trustees meeting.

After a recess of approximately one hour, order was restored and the Board meeting resumed in the regular Board Room. At that same time, many of the demonstrators entered the overflow room and proceeded to make their public comments to the Board.

Santa Monica College regrets that a group of people chose to disrupt a public meeting in an unlawful manner. The college has launched a full investigation into the matter.

The demonstrators came to the Board meeting to protest an SMC summer session pilot program in which extra courses will be offered that will be self-funded.

The intent of the program is to immediately increase the number of total classroom seats available and provide a way for students to make progress towards their goals.

The program, approved by the Board in March, will augment 700 regularly scheduled State-subsidized classes at $46 per credit unit for California residents, an increase of 25 percent more classes than last summer. Approximately 50 extra self-funded classes in the pilot program will be offered at SMC’s actual cost, which is $180 per credit unit, or $540 for a typical 3-unit course. SMC’s cost is far below the tuition rate at the State’s other public educational systems.

The college’s action comes at a time when SMC is confronted with the greatest budget crisis ever to face higher education in California.

As California’s public post-secondary educational capacity contracts, so do the life prospects of many young Californians. A tragic number of students are currently being turned away from community colleges and CSU campuses.

SMC’s move comes in the midst of a State budget crisis that has had devastating effects on college students in California for the last four years. Since 2008-09, State funding for California’s community colleges has decreased by 23 percent, according to the Community College League of California.

In addition, California community colleges face a further 5 percent cut in State funding in 2012-13 if proposed statewide initiatives to raise taxes in November of this year fail.

SMC has kept its courses open to as many students as possible by allowing more students into classes than are funded by the State. Yet, SMC is still turning away hundreds, if not thousands, of students because budget cuts have forced the college to trim class offerings by 1,100 course sections since 2008. Statewide, it is estimated that community colleges have turned away 300,000 students because of budget cuts.

The Board’s adopted guiding principles for the program affirm that courses offered above and beyond the level of course offerings funded by the State will supplement, not supplant the regular course offerings, and that revenue from these programs will be used to increase access to the college’s regular educational programs and services.

Additionally, the college expresses its appreciation to a number of generous donors, in particular, businessman Daniel Greenberg and his wife, attorney and civic activist Susan Steinhauser, two longtime supporters of programs at the College, who have stepped up to help by creating a scholarship fund to help students defray the extra cost of the self-funded program.

The college is also committed to promoting the use of financial aid to facilitate access for continuing resident students.

On Tuesday night, participants were informed that they may submit medical bills to the Student Affairs Office.

The Santa Monica Fire Department reported that 15 to 30 people were treated and released at the scene, and three were transported to hospitals for further treatment and released.