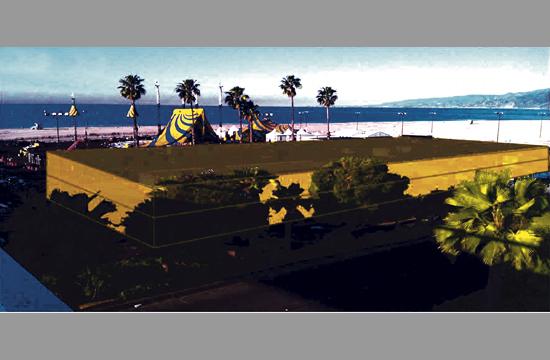 There was probably a time when a driver could drive his or her vehicle onto the deck of the Santa Monica Pier and comfortably find a parking spot – a time many may say is now over.

However, the time may soon come when vehicles may not be allowed onto the Pier at all, but instead be redirected toward an area directly adjacent to one of the City of Santa Monica’s most iconic venues.

In a vote on March 27, the Santa Monica City Council approved a new plan that would move Pier parking to a new area while also ensuring the safety of those walking along its deck.

The new plan would take away 270 current parking spots on the Pier deck and replace it with a three-story garage. It would cost City Hall about $300,000 to draw up the preliminary design plans.

“The confluence of cars and pedestrians on the Santa Monica Pier creates a number of potential safety hazards,” a staff report to council members stated. “Relocating the parking from the Santa Monica Pier deck would mitigate the safety concerns while providing the opportunity for the development of more visitor, recreational, and coastal-related uses. The adjacent beach maintenance area may be a site for replacement parking.”

In addition, by adjusting the Pier’s parking options, the council’s action also provided an organizational groundwork for the upcoming Pier Master Planning effort that will guide the Santa Monica Pier into the future.”

There are currently 230 parking spaces on the Pier, less than half of the number available prior to the 1983 storm; back then there were 471 parking slots.

As part of the Land Use Plan (LUP) of 1991, the City “identified the goal of relocating vehicular parking off the Santa Monica Pier” in order to “facilitate using the vacated area for additional visitor attractions and public open space.”

“The addition of parking adjacent to the Santa Monica Pier would provide safe and code compliant access in addition to augmenting parking in the Coastal Zone,” the staff report stated.

As stated in the staff report, a modified LUP that was adopted by the council in 1992 states “A minimum of 471 parking spaces shall be provided to serve the Pier. This is the amount of parking which existed on the Pier before it was damaged by storms in 1983.”

“The provision of this parking may be phased as redevelopment of the Pier occurs, as long as adequate parking to serve Pier development is provided prior to or concurrent with the occupancy of any new development on the Pier. Parking may be relocated off the Pier, either within reasonable walking distance to the Pier, or in remote parking lots, if an effective shuttle system is implemented to transport people from the remote lots to the Pier,” the amended LUP continues.

The proposed parking structure location would potentially be a three-story structure “designed to preserve viewsheds and to simultaneously organize and aestheticize the beach maintenance area.” Staff had conducted a study that determined such a structure with 280 parking spaces would adequately serves as a replacement lot. It would be located north of the Pier and adjacent to Lot 1N, which is the same parking lot that abuts Pacific Coast Highway and served as the home to Cirque du Soleil.

Owned by City Hall with commercial spaces leased out to individual vendors, the staff report states about six million people visit the Pier annually to take in the venue’s carousel, amusement arcades, food service establishments, and beach oriented retail shops. A portion of the Pier is home to a plethora of fisherman as well as a Harbor Guard Office, a bat house, and “a display area for pier history and maritime related issues.”

The Pier was originally built in 1908 and was expanded in 1916. City Hall has owned the Pier since 1953. It was scheduled for demolition in 1973 before local citizens organized a grassroots campaign to save what is now one of the City’s signature landmarks.

The Coastal Commission Review informed staff it was “in favor of removing the parking from the Pier deck to further enhance pedestrian uses of the Santa Monica Pier.”

Relocating the Pier parking from the deck to an adjacent lot or structure would fit nicely with the arrival of the Expo Light Rail in 2015, as “increased pedestrian traffic” in the area due to the Metro’s terminus at the nearby Fourth Street terminus.

Looking ahead, staff was directed to move forward in developing plans for the lot adjacent to the Pier to be primed for new parking. Accordingly, staff will also seek a design consultant by the summer “to provide initial design and cost estimate and appropriate funds for design and cost estimation anticipated to be no more than $300,000.”

By Fall, staff is expected to return to council with the initial design recommendation and financing strategy ready for approval.