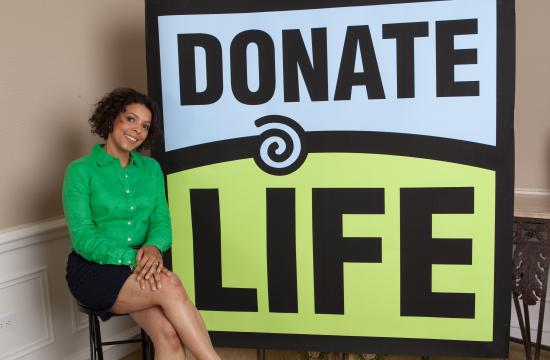 Leiauna Anderson of Santa Monica has been chosen as one of Donate Life America’s “12 Inspiring Women in 2012” from among hundreds of female organ recipients across the country. She was selected because of her commitment to increasing the number of lives saved through organ and tissue donation. As a liver recipient, her life was not only saved, but also transformed. Now her goal is to help achieve “20 Million in 2012,” Donate Life America’s initiative to register 20 million new organ, eye and tissue donors this year, after reaching 100 million nationwide last year.

Anderson was seven months pregnant with her first child in 2006, when she lost the baby after her blood pressure shot up and developed into pre-eclampsia. Her own life was also in jeopardy, but was saved with a liver transplant three days later. After complications with that transplant, Anderson received a second liver a few days later. In 2008, after being warned that another pregnancy could be life-threatening, she underwent an in-vitro fertilization procedure and with the help of a surrogate carrier, became the mother of Rex. “The gifts I received from strangers made all the difference in whether or not I lived and ultimately gave me the opportunity to become a mother,” says Anderson.

See her story and video: http://www.uclahealth.org/body.cfm?id=1009

More than 112,000 Americans are on the national waiting list to receive a life-saving transplant while 18 people die every day waiting. For more information about the “20 Million in 2012” campaign or to register to be an organ, eye and tissue donor and join in this lifesaving work, visit www.DonateLifeAm.