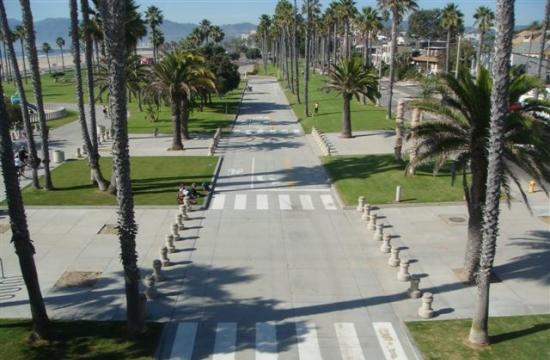 The City of Santa Monica is pleased to announce the opening of Bicycle Campus on Earth Day, April 22, 2012. The Bicycle Campus is an off-street learning area for people of all ages and abilities to become confident about their riding skills. It features a skills course where users can learn and practice bicycle riding, handling, and street skills with the aid of educational displays. The display boards are supported by a web-based bicycle education curriculum including videos of how to use the facility.

This off-street facility, located south of Ocean Park Boulevard at Santa Monica State Beach, is the first permanent bicycle learning area in the City of Santa Monica and the first of its kind in the greater Los Angeles Area. The Bicycle Campus provides an opportunity for people to gain the confidence to feel comfortable riding on city streets, as well as familiarity with bicycle-friendly design features that are being deployed on City streets.

Promoting the facility simultaneously promotes the importance of safe road use and understanding of the new design elements. The facility has generated support from educators, parents and activists.

The City will celebrate the opening of the Bicycle Campus on Sunday April 22, 2012 with opening festivities at 12:30, including an appearance by City of Santa Monica Mayor Richard Bloom, followed by bike training from 1 to 3 p.m. co-sponsored by Santa Monica Malibu Unified School District PTA Council, Santa Monica Bike Center and the City of Santa Monica. Come hone your bike skills, sign up for a training class, see examples of bike design features now deployed on City streets, enter a raffle for bike gear, and tour this unique new facility.

This event is free and everyone is invited to attend.