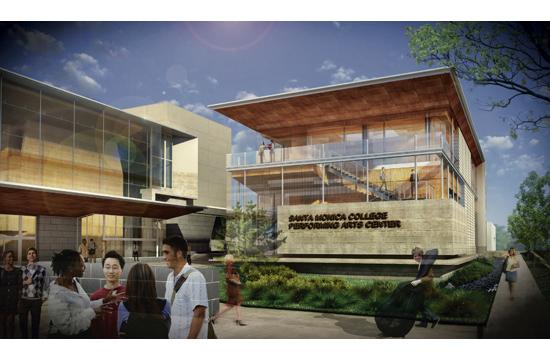 There will be more space for cultural appreciation at the The Eli and Edythe Broad Stage at Santa Monica College (SMC), as the school announced it will “break ground on a new building that will include a Music Hall.”

“The east wing project is a two-story facility that includes a multipurpose room (Main Hall) on the ground floor, storage rooms on both floors, and two music labs on the second floor (a piano practice room or Music Lab) and a vocal room for choir and opera (or Rehearsal Space),” a representative told The Mirror on behalf of The Broad Stage. “Approximately 4,500 (square feet) of existing building will be demolished and replaced by the new building of approximately 15,000 (square feet).”

“With resources at a premium, we believe the Santa Monica College Performing Arts Center is a powerful investment that will pay dividends for generations to come,” he stated. “We strongly believe in the future of our students, our arts education, and the shared cultural life of our community by helping make that future possible.”

The Broad Stage Artistic Director Dale Frazen said the East Wing is not only a vital cog in the performing arts center’s mid-range plans but also a game-changer in establishing the City of Santa Monica as a significant destination for culture and the arts.

“What’s most exciting about this third space is that it will help us expand the scope of our programming and The Broad Stage reputation as a unique cultural landmark that is beautiful, intimate and state-of-the-art,” Franzen stated. “It is also central to our vision for the next five years to establish The Broad Stage at the Santa Monica College Performing Arts Center as the West Coast home for relevant, vanguard work created in London, Latin America, New York, Edinburgh, and other cultural hot spots around the globe, including our very own artistic capital of Los Angeles. We set out to become the place where our community could experience the world up the street. Our reach is international but our heartbeat is local.”

As it stands already, the campus’s current configuration is home to the he 499-seat Broad Stage and the black box-style 99-seat Edye Second Space.

Franzen added he hopes the East Wing will ultimately help the performing arts center establish itself as a leading brand for globally-recognized artists to display their respective talents and contributions to the arts.

“People will come to know The Broad Stage as the place to see world-renowned artists departing from the expected, to discover emerging artists re-imagining their disciplines, and to experience classic works interpreted in new ways,” Franzen stated. “By presenting the most relevant artists and productions that are defining our cultural moment and creating the next, I believe we can fulfill our founding promises to artists and audiences alike.”

It was also announced that the architectural firm DLR Group WWCOT will be leading the design process of the East Wing expansion. Plans call for the expanded wing to be a two-story structure and connected to the current Madison Building.

The initial conceptual design plans and overall vision of the SMC Performing Arts Center expansion earned the blessing of The Broad Stage’s Board of Directors.

“The growth of the Santa Monica College Performing Arts Center is a testament to the vitality of Los Angeles’ artists and audiences,” Austin Beutner, chairman of The Broad Stage Board of Directors, said. “The Broad Stage plays an important role in bringing our community together.”

As the East Wing is, at minimum, about three years away from opening, programming for the new facility has not yet been announced. However, the Los Angeles Opera will be collaborating with The Broad Stage next year.

SMC has already submitted the completed design plans to the state for review. If approved, the new East Wing will ultimately allow the Performing Arts Center to top 19,000 square feet in usable space.

Designed by Santa Monica’s Renzo Zecchetto Architects, The Broad Stage opened in October 2008 and, according to its website, its look was inspired by Italian “horseshoe” theatres “yet conceived in an absolutely contemporary vernacular.”

It was funded through an arts education endowement by billionaire Eli Broad worth $10 million.