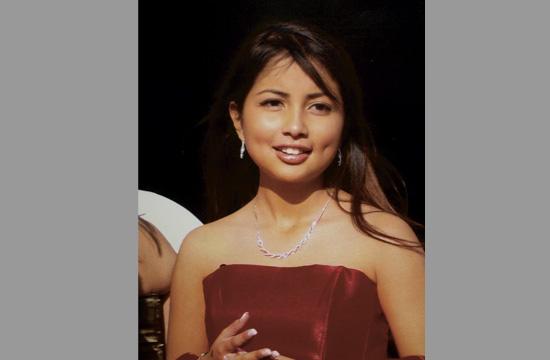 Karla Barberena was nine years old when diagnosed with a pediatric brain tumor so rare and malignant that only 20 cases have ever been published in medical journals. As only the third child known to have lived more than five years, the now 18-year-old and St. Monica’s Catholic High School is about to enter nursing school this fall.

She’s already worked as a volunteer nurse’s assistant at Cedars-Sinai Medical Center, where in 2002 neurosurgeons Keith Black MD, and Moise Danielpour MD, removed the tumor and started her on a course of radiation therapy and chemotherapy.

“I was sick in bed in the hospital and I saw how the nurses were making a big difference,” Karla said.

Eight months before the diagnosis, Karla began experiencing persistent headaches, which eventually caused severe pain on the left side of her head and vision loss in one eye, prompting a trip to the emergency room at a hospital near their Lennox home, where a CT scan showed a mass in Karla’s brain.

The family had no idea where to turn. Her mom, Ileana, who works for the UCLA Lab School, told the principal what had happened. The next day, one of the mothers of children at the school – Carol Bennett, MD, chief of urology at the Greater Los Angeles Veteran’s Healthcare System – approached Ileana and said, “If you’d like, I can ask my husband to look at your daughter’s scans.”

Bennett’s husband is Keith Black, chair of the Department of Neurosurgery at Cedars-Sinai and director of the Maxine Dunitz Neurosurgical Institute and the Johnnie L. Cochran, Jr. Brain Tumor Center.

What Black saw on the CT image was a golf ball-size growth on the left side of her brain – perilously close to the area that controls speech.

“That threw me,” Ileana said, overwhelmed at the thought of her daughter being unable to communicate.

“Thank you for looking at Karla’s scans,” she told Black, “but I don’t know what I can do.” Her insurance covered services at another hospital, not Cedars-Sinai.

The next day, Ileana was again contacted by Bennett.

“My husband will do the surgery at no charge and we’ll find donors to pay for the hospital costs,” Bennett said.

Ileana later learned that Danielpour, a pediatric neurosurgeon at the Cedars-Sinai Maxine Dunitz Children’s Health Center and director of the Pediatric Neurosurgery Program in the Department of Neurosurgery, had donated his services.

Cedars-Sinai established a fund for Karla, and parents and faculty members from the elementary school helped collect more than $43,000 for her care.

In the ensuing years, Karla and her parents developed a close relationship with Danielpour and Carole Hurvitz, MD, pediatric oncologist/hematologist, who worked together to coordinate the services of other experts specializing in a wide array of care for children with brain tumors.

Weakened by the surgery, radiation and chemotherapy, Karla sometimes had to be home-schooled before returning to regular classes. She also suffered mild hearing deficit, balance problems, and short-term memory loss.

“My memory and my level of understanding kind of slowed down, but with a doctor’s note, my teachers have given me extra time during tests and quizzes,” said Karla, who will graduate from high school.

In 2003, Karla, who sometimes volunteers as an altar server during masses, was a featured speaker at a fundraising event sponsored by The Brain Trust, a group of influential women who support Black’s research.

Her story, which underscored the importance of giving, also steered her life toward her future profession.

“I was sick in bed in the hospital and I saw how the nurses were making a big difference. They did a lot for me, and I wanted to give back. I wanted to feel that I can make a difference for other people, as well,” Karla said.