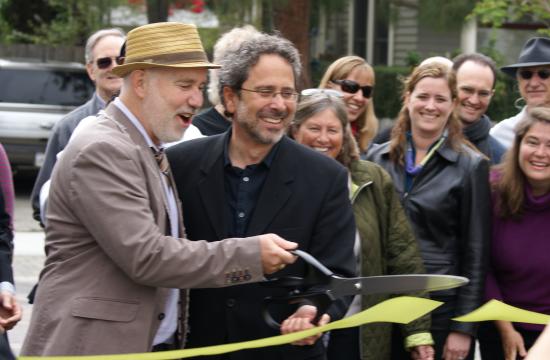 The first “Sustainable Living Street” was unveiled in the seaside Borderline Neighborhood of Santa Monica last Friday, March 30, at the corner of Ozone and Longfellow.

Merging pedestrians with motorists, the redesigned two blocks of Longfellow Street does not incorporate the traditional practice of segregating motor vehicles, pedestrians and other road users through the traditional roadway, curb, sidewalk, and parkway configuration.

In its place is a design featuring differentiated textured pavement, plantings, and lighting lending to a people-oriented understanding of public space, where walking, cycling, socializing, and driving cars become integrated activities.

Renovated streets in Santa Monica included Longfellow and connecting streets Ozone, Marine and Navy Streets, as well as part of Wilson Place east of Lincoln Boulevard. This project took nearly six years to complete due to extensive community input and the ambitious goals of the project, but was completed within the original $2.1 million budget.

“The aesthetic renewal that has taken place in this neighborhood is a shining example of how the community, government and skilled consultants can partner together to create neighborhoods that are communal, sustainable and beautiful,” said Mayor Richard Bloom, speaking on behalf of the City of Santa Monica at the event. “The neighbors, engineers and designers managed to take this narrow street and fit in places to walk, cycle, play and socialize, and you can still drive on it – if you absolutely must.”

“Shared streets” originated from the Dutch concept of a “woonerf,” a term loosely meaning “street for living.” The Borderline Neighborhood shared street project is believed to be one of the first of its kind in the United States.

Longfellow is a narrow residential street that backs up to multiple commercial properties on Lincoln Blvd. to the east.

Citing crime, traffic and quality of life concerns, residents approached the City Council in 2006 and funding was allocated for improvements.

The area had many constraints that made design a challenge, but both engineers and residents had high hopes.

The existing right-of-way on Longfellow Street was exceptionally narrow at forty feet, and paved from property line to property line without sidewalks or landscaping.

It has brought a stronger sense of neighborhood to the residents; and promotes walking and cycling, while still preserving parking and access for utility and emergency vehicles. The project will be capped off with a new public art feature to be selected at a later date.