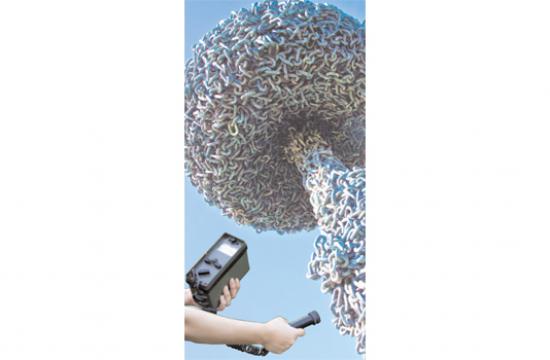 After thorough testing with Geiger counters and other radiation-measuring equipment, personnel from the Atomic Energy Commission have determined that the Santa Monica sculpture “Chain Reaction” is not actually radioactive as has been asserted by opponents of the artwork.

A group calling itself “People Incensed by Sculpture Sites Yell” (PISSY) urged the City to steer away from efforts to retrofit and save the Paul Conrad sculpture.

The PISSY people added fuel to the controversy by insisting that the sculpture of a nuclear mushroom cloud was actually radioactive.

PISSY members reinforced the rumor by making 911 calls to Santa Monica Police alleging that giant ants and a 50-foot woman were seen near the sculpture, and stating that: “This is obviously what happens when radiation starts changing everything.”

But testing completed last week by the AEC indicates that “Chain Reaction” is giving off no radiation and that any efforts to restore the sculpture will not lead to catastrophic mutations or “all kinds of stuff getting big and gnarly” as claimed by the PISSY people.

The “all clear” news has strengthened support for saving the sculpture.

“The fact we might keep the sculpture and not be eaten by giant ants is some of the best news I’ve heard,” said one supporter of the Conrad piece, adding, “Of course there’s still the possibility that Godzilla could swim to our shores from Japan, but as I understand it Mothra is on our side and would engage the angry lizard…