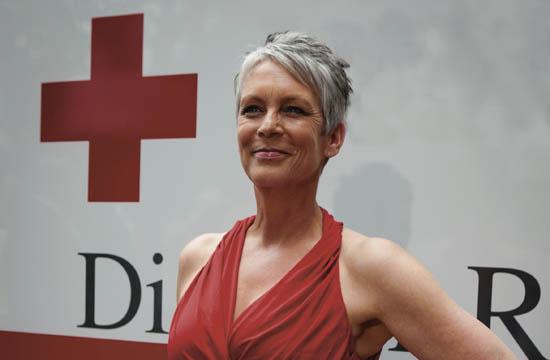 Guests just arriving at the Fairmont Miramar Hotel in Downtown Santa Monica on Saturday late afternoon were seeing red – lots and lots of red. That was because the American Red Cross hosted one of its signature events here in the coastal municipality, honoring Jamie Lee Curtis and Denis Leary at a star-studded event in The Red Tie Affair.

“I am just a volunteer,” Curtis said upon accepting her honor, the American Red Cross “Crystal Cross Humanitarian” Award. “I am just one human linking to another human.”

Curtis, who starred in iconic films such as “Halloween” and “True Lies,” added volunteerism is and always has been the true spirit of the American Red Cross.

She also added the organization was vital responding to international crises such as the recent earthquakes in Haiti and Japan.

An active member of the Red Cross, Curtis, who is part of the group’s national celebrity cabinet, has participated in public campaigns promoting emergency preparedness.

An actor and comedian known for his role in “Rescue Me” and as the voice of several Ford truck television commercials, Leary received the Red Cross’s “Spirit of Service” Award. The actor-comedian founded the Leary Firefighters Foundation in 2000 in response to six firefighters from his hometown who lost their lives fighting a fire, including his cousin and childhood friend.

The foundation has since distributed more than $2.5 million “to fire departments in the Worcester, Boston, and New York City areas for equipment, training materials, new vehicles, and new facilities.”

“This is one of the biggest charities in the world,” Leary said, adding the Red Cross is such a large draw that it is humbling for anyone to be invited to be involved with the organization as a volunteer, spokesperson, or award recipient.

Meanwhile, earning the “Spirit of Inspiration” Award was Martinez, who, during a 2003 deployment in Iraq, suffered smoke inhalation and severe burns to more than 40 percent of his body after a Humvee he was driving struck a land mine. Spending 34 months in recovery at an Army hospital in San Antonio, Tex., Martinez underwent 33 surgeries, including cosmetic surgery and skin grafts.

When a nurse had asked Martinez during his recovery to speak to another burn victim, the war veteran found his calling as a motivational speaker and has since shared inspirational messages of optimism and resilience.

“When there are times of need around the world, the Red Cross is always there,” Martinez said. “They always step up. They always find a way to be there for people and families.”

Headquartered in Washington, D.C., the American Red Cross was founded by Clara Barton in 1881 and has since grown to now include 650 chapters worldwide.

“The event is all about raising money to help get Southern California prepared,” she said.