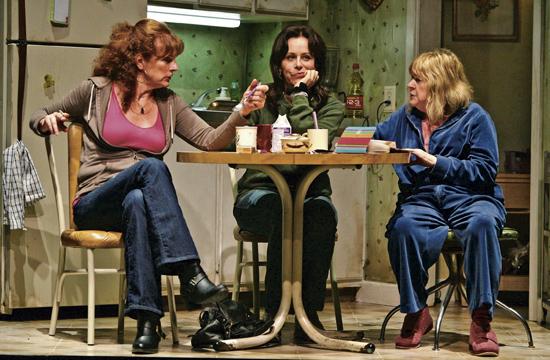 Pulitzer-prize winning playwright David Lindsay-Abaire’s brilliantly written “Good People,” on stage at the Geffen Playhouse in its West Coast premiere, is a comic, but penetrating look behind both sides of the Irish curtain – “Lace Curtain” and the curtain of the struggling working class living in South Boston’s Lower End.

With surgical precision, the playwright explores the life and times of a colorful cast of characters who struggle with friendships, betrayal, unemployment, financial challenges, desperation, single parenting, and a host of topics with which these folks are dealing. No cardboard cutouts here, as each of the playwright’s characters is fully developed with a distinctive voice and specific actions.

Under the razor-sharp direction of Matt Shakman, most of the story centers on the simplistic and straightforward Margie, played to sheer perfection by Jane Kaczmarek, whose pathos and comic timing is impeccable. On rise, Margie is about to be fired from her job at the Dollar Store by Steve, well-played by Brad Fleischer who ultimately turns out to be a real softie. He is under instructions to fire her for being frequently late and although he has sympathy for her predicament, does the deed. Despite the comic lines, including accusing him of being gay because he plays Bingo, her desperation bleeds through. Her reason for being late is valid as she has a retarded adult child named Joyce who requires constant care, usually by her habitually late landlord/friend/babysitter Dottie, kind of a dingbat played wonderfully by Marylouise Burke who has some hilarious lines. In discussing who might be the father of some local kids, she says to the man who she thinks is in denial about who the real father is, “You’ve never seen a Mexican; those kids are straight off the taco truck.”

Margie’s other close friend is the very pragmatic Jean, played by the most talented Sara Botsford, who delivers her comic lines with hilarious deadpan timing. During a gossip-filled coffee klatch in her kitchen, Margie learns that her old high school boyfriend, Mike, is indeed back in town and has a thriving medical practice. Margie gets it in her head to visit him and ask for a job and the smoldering fireworks begin. Frustrated by her repeated attempts to get through to him at the office, she shows up unannounced and some awkward moments ensue. He is surprised to see her and before long she is practically begging for any kind of work, which he apologetically has to refuse as there aren’t any openings in his office. It’s not long before the “class” differences begin to rear their ugly heads as Mike explains that he is a reproductive endocrinologist. She has no idea what that means so he simplifies it by saying that he is a fertility doctor specializing in high-risk pregnancies and she says he should have said that in the first place.

Pretty soon the subtle and not so subtle accusations begin to surface as Margie, who dropped out of high school when she became pregnant, becomes aware of how successful he is, living in the exclusive Chestnut Hill section with a wife and daughter. He clearly extricated himself from living in the projects by continuing with his education and Margie reminds him that, “I didn’t go to U Penn – I didn’t go to U” anywhere.” As the conversation continues, she accuses him of forgetting his roots and being “Lace Curtain Irish” at which he takes offense, defending his success saying, “I’m still a southie kid at heart.” Jon Tenney as Mike plows deep into his character and besides delivering his lines with comic shadings and nuances, could be a poster boy for developing a powerful subtext.

The delicious repartee continues and when Margie finds out he’s having a birthday party, she finagles a reluctant invitation saying perhaps one of his rich friends might be able to give her a job. However, during a Bingo game, Mike calls to tell her that his daughter is sick and the party is cancelled. Margie doesn’t believe him and decides to show up anyway.

Margie barges into their home only to find that the party was actually cancelled and we meet Mike’s lovely African-American wife Kate, played extremely well by Cherise Boothe. We already know that there is some strain between Kate and Mike as they are in counseling. Illuminating the class differences between her and Margie, one particularly funny scene is when a well-intentioned Kate serves an assortment of cheeses that Margie has never heard of or seen before. Kate doesn’t mean to be condescending, but the world in which she was brought up is planets apart from Margie’s so when she innocently asks “Are you lactose intolerant?” Margie’s deadpan response is priceless or when Mike says, “How’s the wine,” to which Margie replies, “How the f…should I know.”

As the evening progresses, Margie’s intrusion into their home becomes rife with tension as accusations and recriminations begin to surface and facts are revealed that are unsettling to Kate. Mike is unsympathetic, saying Margie had choices, and soon it becomes difficult to separate the lies from the truth right to the end. Look for that delicious zinger when Margie leaves their home.

“Good People” is supported by an outstanding technical team including a fabulous multi-functional set by Craig Siebels which is transformed from a brick-lined alley to the interior of Margie’s kitchen, the interior of a church where the Bingo games take place, to Mike’s high-tech medical office, which even has recessed lighting, to his beautifully decorated, spacious living room. Elizabeth Harper’s light design, coupled with Jonathan Snipes’ original music and sound design, all work together to visually enhance this superb production, which boasts a uniformly gifted ensemble that will leave you laughing with tears in your eyes.