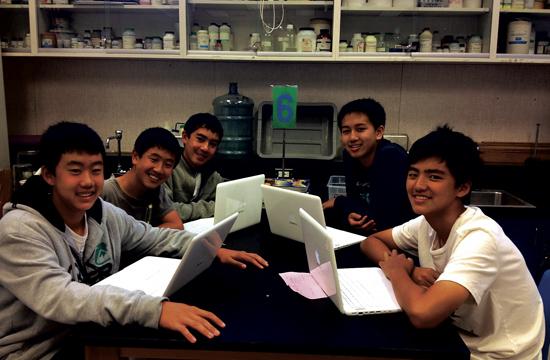 Here’s a Latin tip for anyone – Carpe diem.

“Seize the day” is an appropriate motto for Lincoln Middle School students, who have designed experiment proposals to be sent into outer space. The Student Spaceflight Experiment Program (SSEP) is a national science, technology, engineering, and mathematics (STEM) education program undertaken by the National Center for Earth and Space Science Education (NCESSE) in partnership with NanoRacks, LLC.

With funding from the California Space Grant Consortium, Lincoln Middle School has been given the opportunity to send a mini-laboratory called Fluids Mixing Enclosure (FME) as part of the SSEP Mission 2 payload, Antares, to the International Space Station (ISS).

Lincoln is one of 11 communities nationwide to participate in this program. Any student attending Lincoln was given the chance to design and submit an experiment that would test the effect of microgravity on a physical, chemical, or biological system.

From April 25 to May 11, students met after school from 3 p.m. to 5 p.m. with mentorship and help from inspiring eighth grade physical science teachers Carol Wrabel and Marianna O’Brien. Along with help from visiting local scientists, students were supplied with everything needed to research and design an experiment of their choice.

The chosen experiment will be ferried to the ISS using transport vehicles such as the SpaceX Dragon. When docked, the experiments will be transferred aboard the ISS.

Wrabel has high praise for the SSEP.

“SSEP is the chance of a lifetime,” Wrabel said. “It isn’t often that a student gets to send an experiment that they designed to the International Space Station. This has never happened in my 24 years of teaching, and I think that it is amazing.”

This after school program has already been a success, long before the FME departs for the ISS.

With experiment proposals ranging from dissolved oxygen levels to Mexican jumping beans, great interest in science has been generated through this program.

While researching topics, eighth grader Victor Cheng not only learned about science, but also began to enjoy it.

“I truly enjoyed the scientific process of learning,” Cheng said. “Through the SSEP program, I not only learned a lot of valuable information that I would not have known otherwise, but I began to enjoy science much more.”

On May 12, a panel of local educators, scientists, and engineers reviewed all Lincoln proposals, and narrowed them to the best three proposals.

These three proposals have been sent to a national panel, and on May 31, 2012, one proposal will be chosen to be sent to microgravity.

Eighth grade student Jaebok Lee, a member of the clumping proposal team, raved about his experience with SSEP.

“The SSEP program was an eye-opening experience,” Lee said. “It was fun meeting local scientists and I learned a lot about the life of a scientist. I have newfound respect for them now.”

The SSEP was created by NCESSE in order to generate interest in fields such as technology and engineering, for future generations.

According to the NCESSE website, ncesse.org, “SSEP is the first pre-college STEM education program that is both a U.S. national initiative and implemented as an on-orbit commercial space venture.”

The SSEP, however, is not a NASA program or a NASA sponsored program. This on-orbit educational research opportunity is enabled through NanoRacks LLC, which is working in partnership with NASA under a Space Act Agreement as part of the utilization of the International Space Station as a National Laboratory.

To find more information on the SSEP, check out their website at http://ssep.ncesse.org.

Lincoln Middle School provides a nurturing environment to approximately 1,100 students in grades six through eight. With an aspiring vision statement, Lincoln consistently ranks at the top of the district with high California State Testing scores that are improving every year. Located at 1501 California Avenue, Lincoln helps mold students into resourceful, life-long learners. A Disney Spotlight School and a California Distinguished School, Lincoln offers support to all students in their pursuit of academic achievement and exploration of the arts. Visit Lincoln Middle School’s website at http://www.lincoln.smmusd.org.