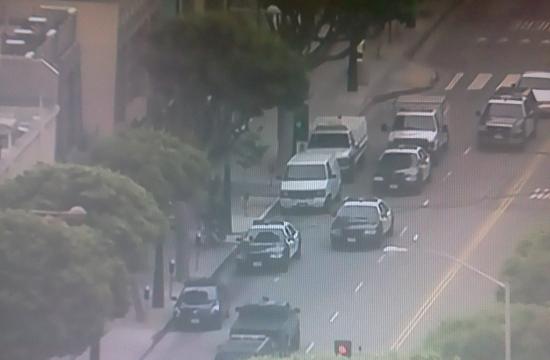 Police and California Department of Fish and Game wardens had been at the scene since about 6 a.m. after a janitor saw the baby mountain lion in the courtyard of the building, which is home to SMC Emeritus College and a yoga studio.

SMPD Lt. Robert Almada told The Mirror that attempts were made to immobilize the animal with non-lethal force.

Almada said the Fish and Game wardens were the ones to fire the tranquilizer dart that was ineffective.

“Our officers fired both the pepper ball and then eventually the firearms,” he said.

Madeline Bernstein, President of spcaLA, asserts that an investigation should be conducted into the procedures and training protocols required for safely interacting and subduing wildlife.

“Basically, they agitated and frightened a cornered cat before they killed her,” Bernstein said. “Hosing a Mountain Lion down and then shooting her with pepper-balls only served to make her more frenzied. Deadly force should be used only as a last resort. The citizens and wildlife of California deserve better.”