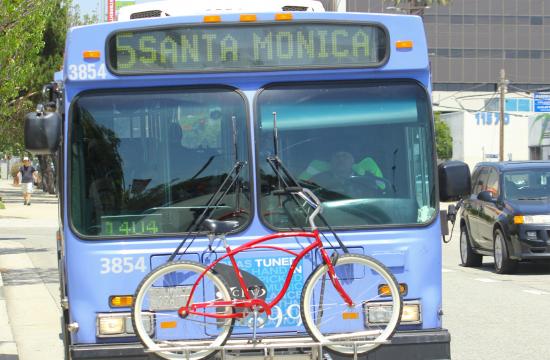 Changes are on the way for many Big Blue Bus routes and schedules that will be launched on Sunday, June 17 in preparation for the arrival of EXPO Light Rail to Culver City, and for the shift in travel habits as the school season ends and the summer season begins.

BBB operations staff have developed a way to serve the light rail station and summer travelers using only existing resources.

One of their strategies was to redeploy buses from unproductive service to routes where most people are riding.

By doing so, Big Blue Bus can be waiting at the Expo Station in Culver City to connect customers to Santa Monica, Century City, UCLA, and other BBB routes.

One of the biggest changes will be the realignment of both the Route 5 and the Route 12. Starting June 17, Route 12 will only operate between a new stop on northbound Robertson just south of Venice Blvd. (next to EXPO Line’s Culver City Station) and UCLA.

Although Route 12 will no longer travel along Robertson Blvd. north of Venice, Route 5 will take its place, connecting riders to the EXPO Culver City station, Century City and Santa Monica. The Route 5 will no longer operate to the Rimpau Transit Center.

To make the Route 5 and 12 changes possible, resources were moved from poorly performing services like the Downtown Ride, which is being discontinued as of June 17. To get around downtown Santa Monica and the Civic Center area, riders can take Route 2, 3, 4 or 9 along 4th St. or Route 8 along Main St. and 2nd St. instead.

Since these buses have more seating than the typical 40-foot bus used on most routes, BBB can accommodate more riders with fewer vehicles and operators.

Buses to UCLA and SMC will see routes and schedule changes as well. At the request of campus officials, all UCLA serving buses (Route 1, 2, 3, 8 and 12) will use Ackerman Terminal starting at 8 p.m.

Both UCLA and SMC students should also note that Route 11 and the Sunset Ride schedules will operate with less frequency during the summer.