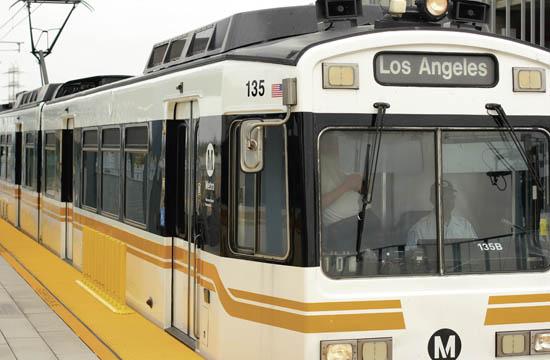 The final portion of the Expo Line Phase 1 is beginning to crystallize, as fully functioning trains pulled in and out of the La Cienega/Jefferson station April 28.

The Venice/Robertson station in Culver City is set to open in late June according to Eric Olsen, Chief Project Officer of the Light Rail Expo Authority. That will eventually open the door for the street car service to enter Santa Monica.

According to Olsen, “everything went well,” and there was “good ridership on both Saturday and Sunday,” when the fares were free. Full fare service started April 30.

In an official statement, The Expo Line Authority said that, “it was great to see so many people riding the new Expo Line this weekend. We think this line will give people a great alternative to the heavily congested I-10 freeway and anticipate that ridership will continue to grow in the months ahead.”

Freddy Robles, a commuter who lives in Sylmar and rides his bike to work in Culver City, was excited about the opening of the new station.

“I’m trying it out,” said Robles who works down the street and rode his bike to the North Hollywood station in order to catch the Red Line in Hollywood.

Robles tried out the transition on the Blue Line at Seventh Street and took the Expo Line to the new La Cienega/Jefferson station.

“The train ran smoothly,” said Robles. “It almost felt like a bus. It was quiet and clean. Now I don’t have to bike as far and be in a car in traffic for an hour to get where I want to be.”

Phase 2 of the Expo Light Rail has already begun construction in Santa Monica and, according to Olsen, the line is due to be completed in 2016.

“I can’t wait for that,” said Robles. “That will be a great ride to get my bike over there right on the beach. I will jump on the train, read a book, get home, and once again avoid traffic. It will be very convenient and I’m really excited. LA could use more public transportation.”

“The Expo Line will change our lives when we have the options to go to, say, art events at the Bergamot Station,” said Santa Monica Councilmember Kevin McKeown. “When people want to come to Santa Monica they will be able to do so without creating traffic problems for us.”

“It will be very convenient for multiple reasons,” said Robles. “If you don’t have a car and are trying to stay away from a car or just want to get from point A to point B in a timely manner, it’s nice to know that this will be possible and that it’s going to be on a timetable. If you jump in a car and there’s an accident, you don’t know if you are going to be there in fifteen minutes or forty-five.”

But according to McKeown, opening new lines and stations hasn’t been easy.

A few years ago, the Metro Line Authority had to resolve a dispute with Damion Goodman.

Goodman cited safety concerns involving students who attended Dorsey High School as the reason why he was initially against the building of Phase 1 of the Light Rail, but the Public Utilities Commissions resolved the situation by adding a new station.

Cheviot Hills homeowners, called the Neighbors for Smart Rail, recently protested against the Light Rail coming through their neighborhood and sued contending that Expo Authority officials had not considered the California Environmental Equality Act (CEQA) accurately.

A Los Angeles Superior Court judge ruled that these concerns were unwarranted.

With that settlement, there is now a green light lit for the full construction of Phase 2 of the Light Rail that will extend the line to 4th and Colorado, and give commuters a chance to reach the beach.

“Having the Santa Monica light rail serve us is a wonderful thing,” said McKeown. Though he supports the construction of the Light Rail, the council member pointed out “there are three things to keep an eye on.”

“The effect it will have on housing costs and if it drives up the rent, we have to look out for that. A maintenance yard is being built adjacent to a residential neighborhood in Santa Monica and we are going to have a buffer strip,” McKeown explained. “Between the maintenance yard and neighborhood, we will most likely put in a park along the Exposition and Pico neighborhoods just east of Stewart.”

“In Santa Monica, the trains will be running on the street just like in many cities. There is some talk of putting fences along the street to keep pedestrians from crossing, but I think that is unnecessary and I think that Santa Monicans can learn not to walk in front of trains,” he added.

According to McKeown, the upcoming Phase 2 of the Expo Light Rail to Santa Monica will be “running at same speed as traffic,” and “won’t be going any faster,” and will be “stopping at traffic signals.”

Fortunately, none of these concerns seem to rise to the level of concern flagged by the residents of Cheviot Hills.

“We just want the Light Rail to work the best it can for the residents of Santa Monica,” said McKeown.