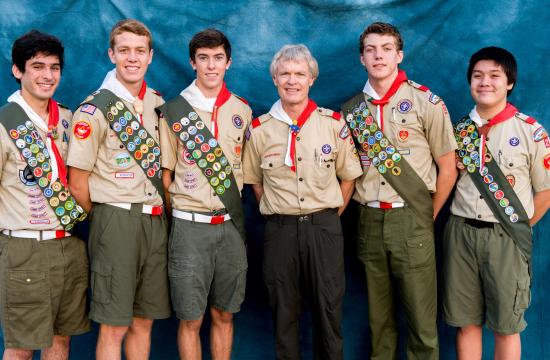 Five Santa Monica teenagers will be awarded the highest rank one can earn in the Boy Scouts on June 3.

Andrew Capron, Eric Gironda, Cheyton Jain, Jager Metz, and Tucker Moody will be honored with the rank of Eagle Scout at the Troop 2 Eagle Court of Honor to be held at Camp Josepho in the Santa Monica Mountains.

Each of the scouts being honored led a major project to improve the quality of life for people in the local community.

All five are students at Santa Monica High School.

Capron, a senior, renovated and repaired the track and field shed at Samohi.

Gironda, a junior, cleared overgrown brush and painted a fire gate along a popular hiking trail in Will Rogers State Park.

Moody, a junior, built new risers and book carts for the library at Will Rogers Learning Community.

Dozens of Troop 2 Scouts joined in each of the projects.

Troop 2 is one of the oldest and largest Boy Scout troops in the Western United States.

In its 65-year history, Troop 2 has graduated 296 Eagle Scouts and traveled to scout camps and high adventure destinations throughout the United States.

Troop 2 Scouts are known to have saved at least 56 lives.