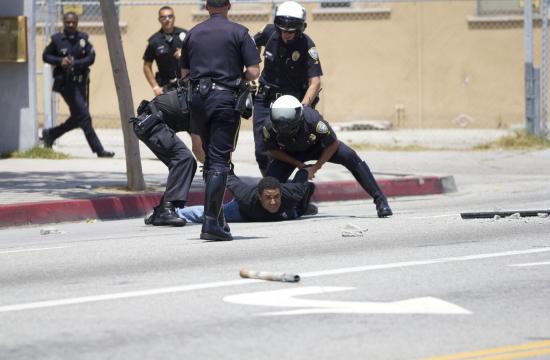 A 35-year-old homeless man was arrested Thursday afternoon after throwing concrete blocks at passing cars from the rooftop of 2011 Pico Boulevard in Santa Monica.

Santa Monica police officers responded to the scene after several 911 calls at 1:06 p.m. The responding officers observed the suspect on the roof was acting irrational and was unresponsive to their demands.

SMPD Crisis Negotiators were called to the scene and attempted to talk the suspect down.

SMPD Sgt. Richard Lewis said after about 30 minutes, the suspect jumped off the roof and onto Pico Boulevard.

“Due to the suspects irrational behavior and the distance he jumped from 20 plus feet, he was transported to a local hospital for evaluation,” Lewis said. “After several hours and determining the suspect had no significant injuries, he was cleared for booking and transported to the city jail.”

The suspect was identified as Joseph Michael Duhon, a 35-year-old homeless African-American man.

During the incident, Duhon struck the windshield of at least one moving vehicle on Pico Blvd. This victim did not claim any injuries at this time.

Duhon was also found to be in possession of methamphetamine and a fixed blade knife. Duhon was not a resident of the complex, but had been visiting a friend.

He was later booked for the following charges:

23110(b) CVC (throw dangerous substance at a moving vehicle).

11550 H and S (under the influence of a controlled substance)