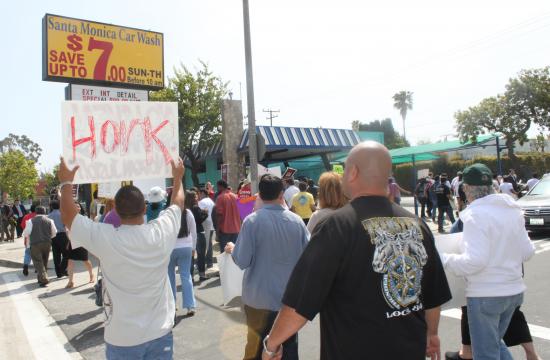 A lawsuit was filed Monday on behalf of Latino car wash workers against three Santa Monica car wash facilities for “unlawful labor policies and practices resulting in thousands of hours of free labor at each carwash,” according to the suit.

The three car washes are all owned by Edna, Bijan and Kambiz Damavandi and will be pursued as a single entity.

The lawsuit seeks compensation for employees often being forced to work “off the clock,” without overtime pay, and without rest or meal breaks.

A rally was held along Pico Blvd. where it ended at Santa Monica Car Wash for a press conference.

Victor Viramontes, MALDEF National Senior Counsel, said its organization today filed a class action on behalf of four workers against three Santa Monica and Los Angeles area car washes for “violating the civil rights and the right to basic minimum wage and the rights under California wage and hour law.”

“This country and sadly the United States in particular, has a long history of stepping over the civil rights of Latino employees and failing to pay them minimum wage,” Viramontes said. “This is true throughout California and the southwest whether we’re talking about the fields, the kitchens, and sadly the car washes. But today four workers are stepping forward to say that history that many thought to be unchangeable will be changing and set out for a new future.”

Espiritu said the lawsuit challenged the employers systematic practice that’s designed to maximize the amount of work that they get out of their workers while minimizing the pay that they get.

“Their employer has violated California’s minimum wage and hour laws amongst other violations of California’s labor code and unfair competition act,” Espiritu said.

“These three car washes deny the workers the wages they are entitled to by engaging in practices such as requiring the workers to arrive up to half an hour early before work opens to set-up, but denying these workers the ability to clock-in until the employer deems there be enough cars there for all the workers to begin working.

“They also regularly deny workers lunch breaks, but fail to compensate these workers as they are entitled to under California law. Additionally, many of these workers work in excess of eight hours a day and in excess of 40 hours a week, but their employer has designed a time-keeping system to ensure that the workers are denied their ability to get overtime pay. These are but some of the various ways that the defendants in the case have denied their employees the wages that they are due.

“The plaintiffs have come here today to ask that the California courts provide them restitution for all their back wages and also injunctive relief to ensure that their employers cannot continue to exploit workers in this fashion.”

“Here we go again, here we go again,” Durazo said. “Imagine that wage theft still occurs everyday in LA County like the car wash industry and they think they can abuse those workers because they are immigrants. That is the primary reason — they think they can abuse the workers. But the good news is that we have courageous immigrant workers who are fighting back and standing up for their rights.”

Durazo said she called upon the Santa Monica City Council to “step-up and defend and protect these workers within Santa Monica.”

Santa Monica Car Wash refused to comment on the lawsuit.