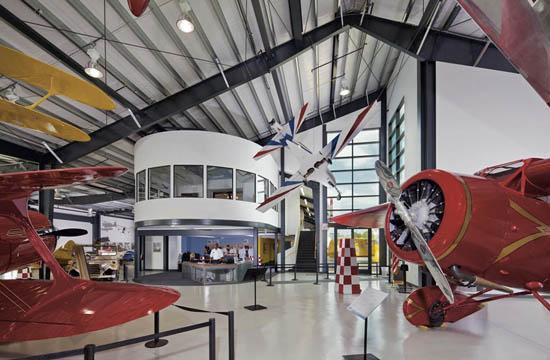 Local Santa Monica building design-centered firm, Minardos Group, has taken adaptive reuse to a new level with the recent opening of the Santa Monica Museum of Flying. Situated on 22,000 square feet of previously deteriorated Santa Monica Airport hanger spaces, the dazzling new museum showcases local aviation history and a myriad of vintage airplanes through a floor plan that allows for maximum exhibit space. A number of full-size classic planes greet visitors upon entry while a number of planes hang to simulate how they appear in flight from the museums’ ceiling.

Corrugated metal siding clad the exterior, reflecting what buildings of the era were made from, left in a natural finish were intended to remind us of the metal skins of airplanes and juxtaposed with a true-blue roof. The saw-toothed profile is homage to the profile of the old aircraft factories.

The existing metal-framed building along Airport Avenue had once housed a propeller repair shop and the hangers along the south property line, reminiscent of old grass field aerodromes, had seen better days. The approach was to link all these elements together in a unified structure whose aesthetic would recall the past while its interior would contain spaces that celebrated it. Intentionally kept simple, the building allows the numerous collection of aircraft, artifacts, and aviation art to be the prime focus and to highlight the collection. The challenge was to create an interior that was an assemblage of galleries that could display varied exhibits and remain flexible for special events and community use.

Each material and design element that is incorporated on the site has been chosen to mitigate energy costs. This adaptive reuse incorporates recycled steel in its exterior skin and existing structure, illuminate the interior, cross ventilation for natural ventilation, and on site storm water holding and filtering systems to control run off and pollution. The result is an well-executed, educational, and engaging museum for both local and regional visitors.

Minardos Group has been building design-centered residential and creative commercial projects for nearly two decades, during which time the firm has earned a reputation as experts in the field of contemporary building. The firm is organized into individual Consulting, Building, Development and Estate Care groups. Each Group is comprised of highly creative, design-oriented professionals with strong backgrounds in construction.

In addition to receiving recognition in many leading design publications, the firm has been the recipient of numerous awards, including: Gold Nugget Awards in the Best Custom Home and Office Interiors categories in 2002, 2004, and 2007; Los Angeles Business Council Architectural Awards in 2005, 2006, and 2011 for commercial and institutional projects; an AIA National Honor Award in 2005 for the Jigsaw Office interior; the AISC American Institute of Steel Construction IDEAS Awards 2011 for Indian Paint Brush; and, the AIA Los Angeles Restaurant Design Award for South Beverly Grill.

The Santa Monica Museum of Flying officially reopened in late February after a decade-long hiatus. It was originally established in 1974 and updated in 1989. In 2002, the museum went dark before raising reportedly raising more than $2 million and establishing an endowment to fund the reopening several weeks ago.