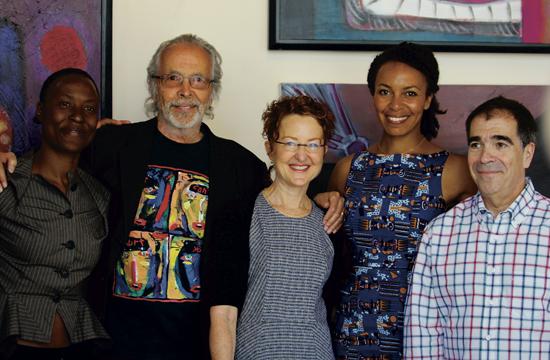 Proud and charismatic, rich and dedicated to the arts, renowned artist and painter Herb Alpert, along with his wife Lani, awarded $75,000 to five talented and exceptional mid-career artists last Friday at the 18th annual Alpert Award in the Arts ceremony.

Alpert said he created the awards in order to help “challenge worn-out conventions” and give future promise to the development of “intellectual and political risks” inside dance, theatre, film, music, and the visual arts.

The 2012 Alpert Award in the Arts winners were: Nora Chipaumire for dance, Eisa Davis for theatre, Kevin Everson for film/video, Myra Melford for music, and Michael Smith for visual arts.

“This award is something that actually means a lot to me because it awards work that will be done in the future,” Davis said. “It awards people who are experimenting with the form and the genre that they are working in.”

Chipaumire, who is originally from Zimbabwe, is typical of the struggling artist with “lots of debt” and showed up wearing a pair of well-loved Doc Martin styled boots, dancing for attendees and happy that she was the type of artist that Alpert had chosen to sponsor.

“People are ever so generous and humane and patient and approachable so it’s all kind of overwhelming in the end,” said Chipaumire. “It’s humbling and I am kind of used to just being always fitting for a fight, so it is disarming, the whole thing. I feel rather disarmed.”

When asked why he chose to award each artist the generous sum of $75,000, Alpert responded that it was his moral duty to do so.

“It’s just something that I feel is right to do,” Alpert said. “I get pleasure out of it. In today’s horrible economic downturn, the arts are really suffering so great artists need to be supported and I take pleasure in being able to do it.”

Eisa Davis, who won the theatre award category, gave her own reasons as to why she thought she won the Alpert Award.

Davis gave a beautiful acceptance speech portraying her own richness of American character, like some of the roles she has been cast in.

“I am very happy that Herb Alpert decided to take some money that he has, and give it to artists,” Davis said. “He didn’t have to give it to people who don’t have that kind of benefits and safety and security in order to do the work that actually would be exciting and shifting.”

Kevin Everson dedicated his film award to his son who recently passed away.

Myra Melford, who won the music category, found it hard to categorize herself as a musician, but was ecstatic that she won the award.

“That’s the million dollar question,” Melford said. “What type of music do I play?”

In a statement recipient bio by the Herb Alpert Foundation, Melford’s received the award because she is a “fearless musical adventurer in both her composing and playing” studying “classical piano” and “improvisation” and “jazz.”

Over the years, the distinguished Alpert Award panelists have selected a group of artists who have gone on to extraordinary careers after winning the Alpert Award including Zhou Long, 2011 Pulitzer Prize winner in Music; Suzan–Lori Parks, a Pulitzer winner for Drama 2002; four MacArthur Fellows, and 22 Guggenheim Fellows.