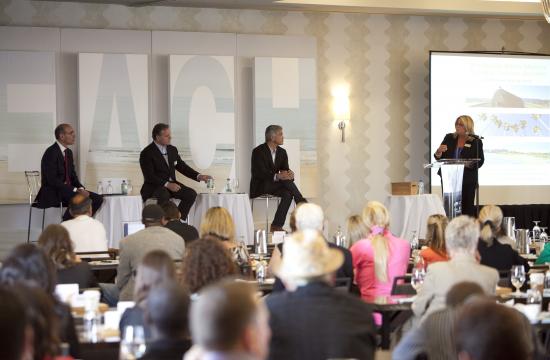 In 1983, Santa Monica was home to five full-service hotels, the average visitor spent $31 per day, and 42 percent of visitors traveled car-free, according to Santa Monica Convention and Visitors Bureau’s CEO Misti Kerns.

Today, Santa Monica has 15 full-service hotels, the average visitor spends $234 per day, and 75 percent of Santa Monica hotel visitors never use a car once they are here.

Kerns presented these statistics at the SMCVB’s Third Annual Travel and Tourism Summit at the Sheraton Delfina in Santa Monica on Wednesday morning.

The summit highlighted the Obama Administration, Visit California, and Brand USA’s latest efforts to drive international visitation, the economic impact of tourism, and the future outlook for the city’s travel landscape.

“Tourism is a critical component in creating sustainable jobs and we are thrilled to have so many industry and business leaders strengthening this message today,” Kerns said. “While business is looking good, we must continue to promote and serve our visitors as they are a lifeline to our economic health.”

During the summit, the results of the 2011 Santa Monica Tourism Economic Impact Study, conducted on a regular basis since 1983, were presented.

During the summit, SMCVB highlighted key achievements in the 2011/2012 fiscal year and opened nominations for the “Thelma Parks Tourism Spirit Award” to honor exceptional service in the hospitality and tourism industry. Winners will be selected and honored quarterly and announced each May.

To learn more about the Thelma Parks Tourism Spirit Award and to submit nominations, visit www.santamonica.com/spiritaward.