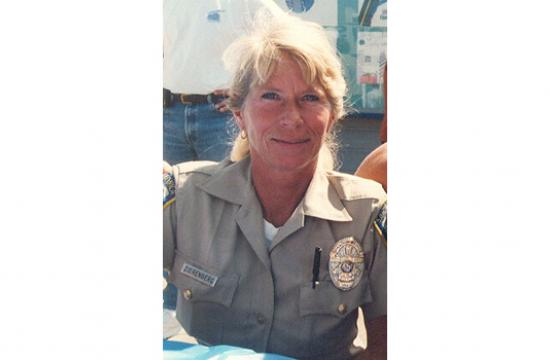 After spending her sophomore and junior years of high school living with her brother, Ralph in Paris, France, and her oldest brother Dick in Istanbul, Turkey, Pam returned to her hometown and graduated in 1968 from Santa Monica High School.

Pam was interested in law enforcement and started taking classes in Administration of Justice at Santa Monica College.

At 19 she accepted a job at the Los Angeles Police Department as a dispatcher. At LAPD she met and married her first husband, George DeSchryver, they had two children, Joe and Melinda. Pam also worked for a few years as a dispatcher at Cal State University Northridge Campus Police.

On April 22, 1985 when she became a Community Service Officer (CSO) for the Santa Monica Police Department she had finally found a job that she absolutely loved. Pam was very happy to return to her beloved hometown of Santa Monica.

Pam spent 13 years as a Community Service Officer for the SMPD. Pam was well respected for her thorough investigations, especially involving major traffic collisions. Pam had a “no-nonsense approach” to things and a great sense of humor, she loved helping people. She was well liked by her co-workers and considered everyone at SMPD to be her second family.

In 1998, Pam moved to Silver Springs, NV with her husband, Rick Zierenberg.

Still drawn to law enforcement, she accepted a part-time job with the Lyon County Juvenile Probation Department as a Work Crew Supervisor.

Pam was never one to sit still. In her younger years, she became an avid bowler and even traveled to tournaments as a semi-professional. She loved to garden, travel and go camping. Her greatest and last trip was, just after her diagnosis in 2011 when, she took her daughter Melinda and granddaughter, Ashley and her daughter Melinda on a trip to Paris and Finland. Pam always wanted to return to the places she had seen while attending high school in Paris. They also visited Finland, fulfilling her dream to see the homeland of her father.

She adored dogs and cats, and had many throughout her life. In her final days they brought her such happiness and peace. She also loved feeding the wild birds and jackrabbits in her backyard. Like clockwork, twice a day, the birds would line up on the rooftop waiting for her to feed them.

Pam is survived by her two children and their spouses: Joe DeSchryver and wife Laurie of San Luis Obispo, CA; Melinda Fattig and husband Todd of Crescent City, CA; She also is survived by four grandchildren Ashley and Trent Fattig, Kyle and Callie DeSchryver as well as her husband Rick Zierenberg. Her father and mother; and her brother Dick Salmi preceded her in death.

A memorial will be held at Pilgrim Lutheran Church, 1730 Wilshire Boulevard, Santa Monica, CA on Saturday May 12 at 1:00pm.

In lieu of flowers the family requests donations to Juvenile Diabetes Research Foundation, a charity Pam was passionate about.