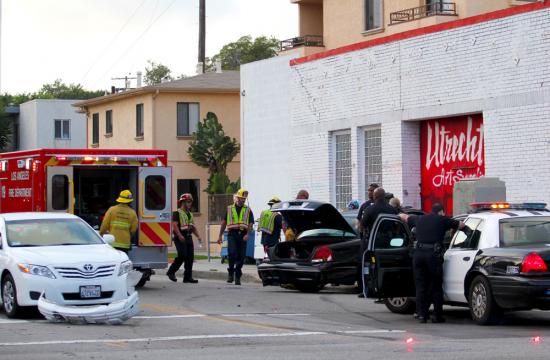 “The officers responded as backup to the report of a stolen car when they got hit by another car,” said Bruce Borihanh Media Relations Officer for the Los Angeles Police Department.

The police car hit one car and bounced off of another before coming to rest in front of Utrecht Art Supplies store.

According to Borihanh, two policeman were injured at the scene and were taken away in an ambulance to a local hospital as a precautionary measure and were later released with only minor injuries.

At least three other cars were involved in the accident.

The driver of the stolen car who was responsible for the call that led to the accident was later caught and taken into police custody without incident.

There were no other injuries reported at the scene of the accident.