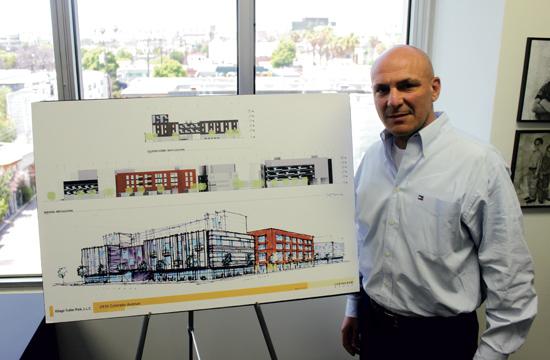 Santa Monica developer Marc Luzzatto presented his latest project plans for the Village Trailer Park (VTP) site called “East Village” to the Planning Commission on Wednesday night, but not without criticism from residents and community members who oppose the project.

During the four-and-a-half hour special hearing, an at-capacity City Hall chambers heard a staff report from City Special Projects Manager Jing Yeo and a presentation from Luzzatto and his team, which was followed by a public comment period that featured almost 40 speakers – about 20 spoke against the project.

The fate of the development still hangs in the balance as the hearing was adjourned and will reconvene this Wednesday, May 30 at 7 p.m. in Council Chambers.

The project means VTP must close and 48 full-time households and eight part-time/seasonal households will have to be relocated.

In a sit-down interview at his office at 2444 Wilshire Boulevard, Luzzatto spoke with The Mirror about his plans to redevelop the site that’s received much opposition from some residents and community members who want to keep the trailer park open.

Luzzatto said he stressed that the most important aspect for him was that every resident who lives at VTP would be relocated to an affordable place in Santa Monica.

He said a number of residents had already relocated to alternative housing that “seem to be happy with housing they’ve secured.”

“We worked with the City for six years to create good relocation options,” he said. “One option is the City reserving 28 spaces at Mountain View Trailer Park, which is City owned. The City will be installing brand new green mobile homes which are much nicer than what they’re living in now. That will accommodate the majority who live at the trailer park, which is three to four blocks away from the existing trailer park.”

Luzzatto said he understood that some of the residents are attached to where they live, but he said many of the current trailers don’t comply with safety regulations with exposed wiring and leaking pipes.

Luzzatto said many of the current VTP residents pay between $300 and $600 a month, which would be on par with Mountain View Trailer Park rates.

“In addition to working with the City to provide housing, we are paying $18,500 so every resident is entitled to that if they move to Mountain View,” he said. “There’s also the option of CCSM – Community Corporation of Santa Monica that operate a number of apartment buildings in Santa Monica that will help residents relocate into low income accommodation.”

Luzzatto said another option on the table for residents is relocation to alternative housing while the new development is being built – and then they would be given priority to move into the new development’s 27 units that will be deed-restricted for very low income households and 11 units that will be deed-restricted for extremely low income households.

“We will pay the rent difference while the new apartments are being built,” he said. We would write a check for residents up to $1180/month to subsidize their rent for up to four years. When the apartments are ready, they can move in.”

Luzzatto said he was also open to one-on-one negotiations with each individual resident in the trailer park.

“One thing that’s continually raised is people saying they’re losing their trailers, but what they’re getting at Mountain View or CCSM, they’re getting the same thing: lifetime rent controlled housing because the rent is controlled by the City,” he said. “I said very early on that no-one who lives there won’t be left with an affordable place to go. That’s the most important thing for me.”

David Latham, a resident of VTP for the past 22 years, spoke about a four-page letter that he submitted to Planning Commissioners in the lead-up to Wednesday’s hearing.

“Our lives are the issue here,” Latham said. “I call this Village Trailer Park Santa Monica’s canary. I’m suggesting that this attack by money interest on the lives of the entire community within our small city will, if it is not stopped, be harbinger of more self-interested Santa Monica harming type actions to come.”

Gayle Cooper, a resident of the VTP for 16 years, spoke passionately about her opposition to the project.

“I’m here this evening to speak not about the value or the scope of the development, but simply about the Tenant Impact Report and request that it not be certified until it’s rewritten to accurately reflect the relocation needs of our residents,” Cooper said. “I want you and the community who have so kindly supported us to know the following shortcomings in the Tenant Impact Report.”

Cooper then listed her reasons, saying the number one issue with the Tenant Impact Report was that she was “not being paid any amount of money whatsoever for the confiscation and the destruction of my home.”

“Not only am I not receiving the appraised value, I’m not receiving an in-part sale value or not even a scrap metal value,” she said. “The so called generous payment to us of the $18,500 is nothing more than the Santa Monica Rent Control relocation fee that developers are required to pay by law. It’s not a settlement fee and shouldn’t be considered as reimbursement for our homes.”

She said her other issues with the Tenant Impact Report was that there was no option of being transferred out of the park into home ownership, which she said was originally an option at Mountain View Mobile Home Park, but is no longer on the table.

Patricia Hoffman, Co-chair of Santa Monicans for Renters’ Rights, said its Steering Committee voted unanimously to pass a motion stating that the VTP should remain zoned as residential, that city staff should look at a reduced project, and any development agreement for the VTP should follow a completed Area Plan not precede it, and existing households should be saved.

Hoffman told Planning Commissioners that CCSM was not a viable option for many VTP residents.

“Village Trailer Park people can get to the top of the CCSM list, but they can only get the apartment if, and only if, they income qualify and CCSM has an appropriate unit available,” Hoffman said. “There are people in Village Trailer Park who are both under income and over income. Just because you get to go to the top of the list you doesn’t guarantee you an apartment.”

Several former VTP residents spoke at the hearing saying they were now better off after accepting relocation options offered by Luzzatto.

June Willis was one of those residents who said she lived at the trailer park for 16 years.

“Just recently I realized the park was going to close,” Willis said. “I owned the trailer, but I didn’t own the ground it’s on. I looked around and found a nice place to live in Santa Monica and Mr Luzzatto gave me $20,000 as a relocation fee. Five years ago, we were told we would get $5000 to $6000 for a relocation fee. I guess he’s negotiated with us. I would think that’s a generous amount to give.”

Another former VTP resident June Harrington said the relocation options seemed like a great deal to her.

Another former resident spoke of her positive relocation experience with Luzzatto that landed her in an apartment within six blocks of the beach.

Read next Friday’s edition of The Mirror for the outcome of the continued hearing on Wednesday.

• What do you think? Email your letters to the editor to editor@smmirror.com.