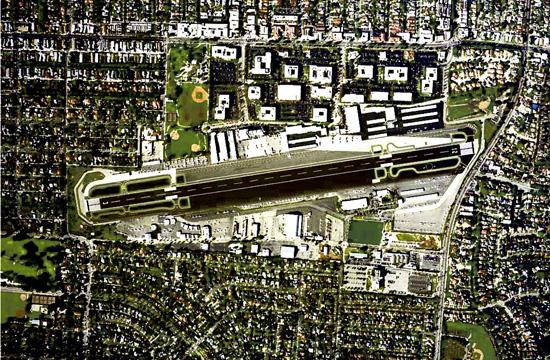 The future of Santa Monica Airport (SMO) may have caused a polarizing rift amongst the region’s residents, but the City Council hopes to find some middle ground as it approved Tuesday night the third phase of the Airport Visioning Process to move forward.

At the May 8 study session held at City Hall, council members weighed in on how best to move forward with the final segment of a process that is expected to determine the fate of SMO after an agreement between the City of Santa Monica and federal officials expires in 2015.

Hundreds of Santa Monica and West Los Angeles residents had chimed in their respective opinions of how they feel SMO should operate during the first two phases of the Airport Visioning Process. Some of those participating residents advocated for complete closure or for significant changes to the airport’s operations to limit flights in and out of SMO.

“There have been two options that have been identified, two issues that have been sitting out there for the longest time with regards to the Airport: the issue of leaving the airport as status quo, and the closure of the airport,” Martin Pastucha told council members. “In between those two options, there is a vast valley. We do not know what resides in that valley.”

“The purpose of these (Phase II) discussions was to provide a forum in which community members and all other interested persons could share their views, to build a record, and to gather views and ideas to aid in the formulation of themes for strategic analysis in Phase III,” the staff report stated.

Staff presented the MIG report that identified five distinct positions extrapolated from the community workshops, each presenting a unique perspective of how the region’s residents viewed the future of SMO.

In all, 312 people had participated in 32 group discussions as part of the Phase II community workshops. According to staff, about two-thirds of the participants were Santa Monica residents, while the other one-third hailed from Gardena, Los Angeles, Malibu, and Thousand Oaks.

A map included in the staff report and presented to council members showed a vast majority of residents lived within the flight path of SMO’s air traffic.

“In summary, one group unequivocally expressed the view that the Airport should be closed because the detrimental impacts of emissions on health and noise upon quality of life, as well as safety risks, outweigh any potential benefits. Proponents of this view identified various possibilities for repurposing the Airport land,” the staff report stated.

There were also residents who favored maintaining the “status quo.”

“At the other end of the spectrum, some participants preferred to maintain the status quo because the Airport is one of the safest and best general aviation airports in California and serves as an important regional resource,” the report added.

In between were three other perspectives, each favoring some sort of alteration to SMO’s current operations but falling short of advocating closure or expressing content with the current situation.

“One group urged that the City should try to close the Airport unless a firm agreement is reached with the FAA (Federal Aviation Administration) that guarantees operational changes sufficient to significantly mitigate adverse Airport impacts on surrounding neighborhoods,” the staff report said.

“MIG describes a second group as arguing that the Airport should only remain open if operations and the airport ‘footprint’ are significantly reduced … (and SMO) has outgrown the City in its residential setting and should be closed unless it can somehow become more compatible with its surroundings and City values,” the report added.

A third group believed SMO to be an asset for Santa Monica and West Los Angeles and should not be shut down.

“This group considered pursuing closure as impractical for three reasons: the potential legal battle with the FAA; the fact that any subsequent repurposing of the Airport campus would greatly exacerbate traffic problems; and, the concern that closure of the Airport would allow flights incoming to Los Angeles International Airport to overfly Santa Monica at lower altitudes.”

At Tuesday’s council meeting, those who spoke during the study session’s public comment expressed concern about the airport’s noise and pollution. Others hoped SMO would address safety concerns due to the airport’s proximity to homes and a gas station.

“I want to get rid of those flight schools,” Los Angeles Council member Bill Rosendahl, who represents the neighborhoods surrounding SMO beyond Santa Monica’s city limits, told the dais.

City Hall currently owns SMO, but, as City Hall pointed out, “aviation activities are governed by federal law and heavily regulated by the Federal Aviation Administration.”

“The vast majority (of Phase II participants) understood that the breadth of federal authority curtails the City’s choices,” staff stated in its report to council members.

Interestingly enough, while City Hall and council members hope to have some finality of how to best operate SMO once the Airport Visioning Process is complete, a legal debate may ensue between Santa Monica and federal officials about what changes, if any, can ever be realized and in what capacity.

“We’re trying to look forward to a range of options we might pursue at a particular point which isn’t here yet,” Council member Kevin McKeown said. “We need to look at things we can do to mitigate the immediate problems right now, but we also need to be fully prepared to make the right decisions for the community … when we can make that decision (in 2015, but) we can’t make right now.”

Phase III community workshops would be held in the winter and staff would return to the city council with its findings in early 2013.

A 1984 agreement between City Hall and the FAA “expressly obligates the City to operate the airport until 2015, when that agreement will expire by its own terms.”

However, the state of City Hall’s operation of SMO post-2015 and its relationship with the FAA is still being debated.

“The City and FAA also have other contractual agreements. These include grant agreements that impose conditions of Airport operation upon the City. The last of these will expire in 2014, according to the City, and in 2023, according to the FAA,” staff wrote in its report. “Additionally, one of two post World War II instruments transfers land from the federal government to the City and purports to subject the City to conditions, including operating the Airport in perpetuity.”

City Attorney Marsha Jones Moutrie said airport closure has been a topic of debate for decades, pointing out a resolution made by members of the 1981 council that recommended shutting down the airport whenever it would be feasible.