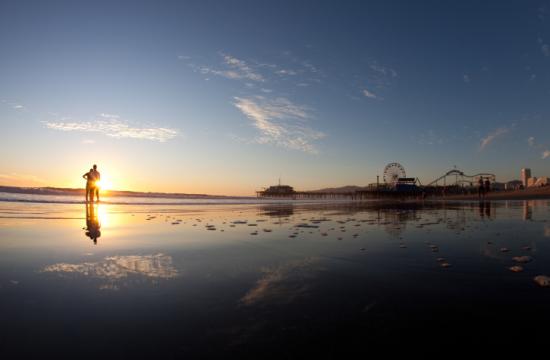 Santa Monica may only share about four miles of the nearly 1,100-mile California coast, but council members believe they are looking at the bigger picture in supporting the proactive protection of the waters that touch both the city and state.

In an effort to address the prospective impacts of climate change, the city council on Tuesday expressed its support of California Sen. Ted Lieu’s proposed Senate Bill that would open the door for the California Coastal Conservancy to take a more proactive role in engaging “in projects that address climate change impacts to coastal resources and urban waterfronts.”

The proposed bill, SB 1066, “corrects an ambiguity in law to ensure that the California Coastal Conservancy, as part of its mission to use innovative entrepreneurial techniques to protect, restore, and enhance coastal resources and urban waterfronts, can engage in projects that address climate change impacts in these areas,” a fact sheet from Lieu’s office stated.

“Support of SB 1066 is consistent with past Council action and could potentially provide benefits to Santa Monica in the form of funding for projects addressing climate impacts to the local coastal area,” a staff report to council members stated.

The proposed bill seeks to “clarify that the conservancy may fund and undertake projects to address climate change” and “prioritize projects that maximize public benefits.”

If passed, the bill would also allow the Conservancy to potentially award grants to public agencies and nonprofit organizations that focus on climate change projects.

The Conservancy was established by the state legislature in 1976 as a “unique non-regulatory entity to serve as an intermediary among government, citizens, and the private sector in recognition that creative approaches are needed to preserve and enhance California’s coast for future generations.”

“Though existing law created the California Coastal Conservancy to protect and enhance coastal resources and urban waterfronts through grants and other non-regulatory means, it does not expressly authorize the Conservancy to help address the adverse effects of climate change on coastal resources,” the Senate bill’s fact sheet stated.

“This bill will enable the non-regulatory agency to more effectively achieve its purpose,” it continued.

Lieu introduced the bill in February 2012.

According to the staff report, “the agency has undertaken more than 1,800 projects along the California coast since it was created.”

“The majority of funding for the Conservancy is drawn from Proposition 84 bond funds approved by California voters,” it continued. “In 2011 the Conservancy supported 79 projects using $64 million of its own funds to leverage $121 million for completion of the projects.”

Under current law, the Conservancy is responsible for “implementing a program of agricultural protection, area restoration, and resource enhancement in the coastal zone within the guidelines established in the California Coastal Act.

Further, the state entity “has the authority to undertake plans and feasibility studies, award grants to public agencies and non-profit organizations to conduct these studies, and undertake educational projects and programs.”

Lieu proposed SB 1066 after the Conservancy board updated its selection criteria in November 2011 in order to address the impacts of climate change.

“These criteria use a risk analysis approach to evaluate the ability of proposed projects to adapt to projected sea level rise and extreme weather events over time,” the staff report stated. “Projects are also evaluated for their ability to reduce greenhouse gas emissions during construction.”

The council expressed its support for SB 1066 as part of its consent calendar. There was no discussion of the matter at the May 8 council meeting.