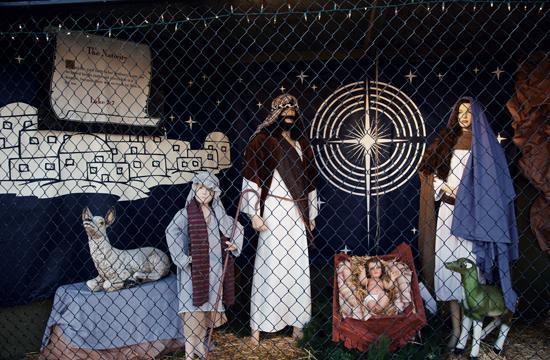 The weather may be heating up and the official start of summer is less than one month away, yet the Santa Monica City Council was rather occupied about the onset of winter at its Tuesday meeting, courtesy of a potential ordinance banning nativity scenes and other religious or non-religious displays at Palisades Park.

For nearly 60 years, City Hall had allowed nativity scenes and other displays to be erected at Palisades Park during the Christmas and holiday season despite a blanket prohibition of showcasing private structures in Santa Monica’s public parks.

However, last December there were more individuals and groups seeking to erect displays than there was space for, forcing City Hall to rely upon a random lottery to determine who would be granted access to the limited display space at Palisades Park.

With neither a deliberation nor a vote, council members are expected to take up the issue again at its next public meeting on June 12 and perhaps come to a vote on a proposed ordinance.

A major issue in crafting a new ordinance and policy direction with respect to nativity scenes and winter displays: City Hall cannot have a system in place that, City Attorney Marsha Jones Moutrie told council members, appears to favor “the content of one set of displays over others.”

Acknowledging community support to allow nativity scenes to remain in place, Moutrie warned council members from ultimately adopting a policy that would appear objective on paper but indirectly allow the display of nativity scenes. Doing so may pose legal complications, she inferred.

Moutrie added the general rule of law governing all Santa Monica area parks is to prohibit structural displays of any kind. Palisades Park’s winter displays have been, by ordinance, the only exception.

The sentiment during public comment ranged from allowing the nativity scenes to remain as an exercise of freedom of speech and maintaining tradition to acknowledging the difficulty providing a fair forum for celebratory religious expression on public land.

Supporters expressed concern that if nativity scenes were ultimately banned, Santa Monica would lose a sense of community.

“I don’t think it’s right to take it away from the community,” Santa Monica native Judy Mulligan told council members. “This has been something that has brought the community together. It brought businesses together.”

If approved in its current form, the ordinance would eliminate private, unattended winter displays in Palisades Park, eliminate legal risks, save “staff time and resources necessary to operate a constitutionally valid regulatory system,” and protect “the views of the park and ocean from Ocean Avenue without precluding the installation of displays on other non-governmental property.”

The prohibition would conform the “usage of Palisades Park to the long standing, City-wide standard which prohibits unattended displays in parks,” a staff report to council members stated.

A pair of state case laws governs how cities may regulate religious and non-religious holiday displays in city parks.

“Based on these cases, staff explained that the City cannot favor particular displays, including Nativity displays, and cannot prohibit displays that criticize other displays,” the staff report said.

Of course, nativity scene supporters contend City Hall does not have to be so stringent in regulating displays at Palisades Park. In an attempt to find a middle ground, nativity scene backers suggested City Hall consider reforming the rules of applying for the winter displays and allowing a “holiday decoration forum.”

It was in 1953 when the first nativity scene was displayed in a public setting. According to Nativity Scenes Committee Chairman Hunter Jameson, the Santa Monica Chamber of Commerce partnered with community churches to start the display in 1953 in an attempt to “attract more visitors and shoppers to town.”

“The business alliance continued as a major donor and organizer until 1982, when tough financial times forced its exit,” Jameson said.