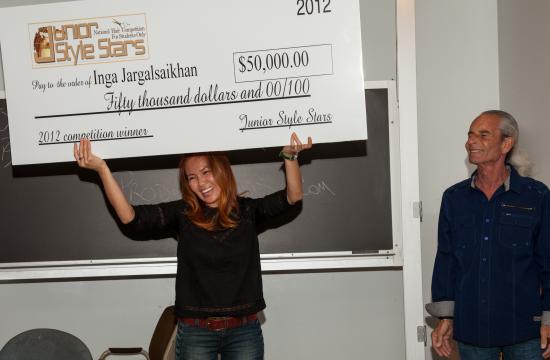 With 315 students competing for the Junior Style Stars National Hair Competition, the smile on Santa Monica College cosmetology student Inga Erdene Jargalsikhan says it all after she received $5000 in cash and $50,000 on Tuesday when she was named winner of the nationwide contest.

In addition, SMC students captured second-, seventh- and eighth-place spots in a contest with 11 finalists.

Jargalsikhan was told she was the winner at a surprise celebration in the SMC Cosmetology Department, where students and professors cheered wildly and shared cake and refreshments.

SMC students Yuzu Tanaka placed second, Roxanne Kumasaka placed seventh, and Brittney Hayes placed eighth in the nation and will also receive prizes. Their awards were also celebrated at the party, which came as a surprise to them as well.

“SMC is just absolutely amazing when it comes to cosmetology,” said Paul Barry, vice president of Junior Style Stars, who organized the competition and presented an oversize check to Jargalsikhan.

Contestants earlier this year received identical mannequins to style, cut, color, and make up in a bridal theme. The students had two weeks to work on their mannequins, which, upon completion, were brought to JC Penney for photos that were then sent to the judges.

“I’m really proud of our students and teachers,” said SMC Cosmetology Department chair Helen LeDonne. “I know these remarkable students who have done so well in the competition will be successful in their careers.”