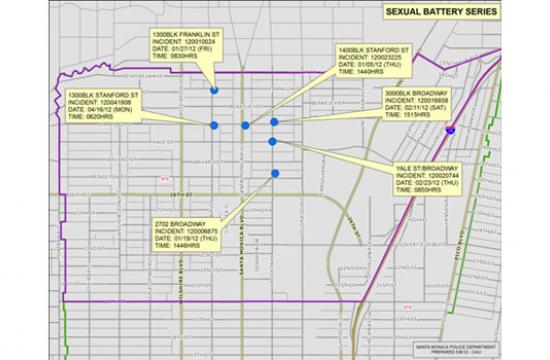 Santa Monica police are asking for the public’s help to locate a Hispanic man suspected of committing six sexual assaults this year.

On January 27, the suspect committed a sexual battery on a female in the area of Franklin Street and Santa Monica Blvd.

Since then, there have been five additional reports of similar incidents.

All of the incidents have been in close proximity to one another (as pictured above), and the suspect description in each incident is of a similar nature.

SMPD Sgt. Richard Lewis said the suspect has been described as a Male Hispanic, 5’05’’ to 5’09’’, with a medium to heavy build, having straight black hair, slicked back.

Lewis said his clothing has varied with each incident.

“On each occurrence, he has been reported to be riding a bicycle, described only as a mountain bike,” Lewis said.