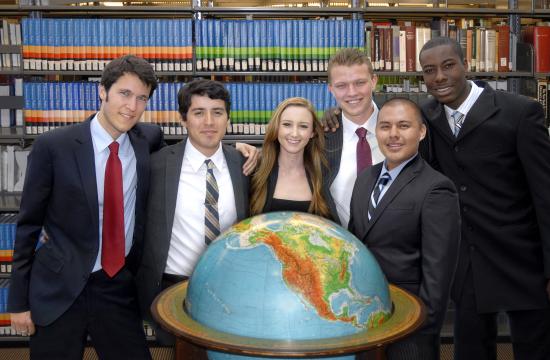 Six outstanding Santa Monica College students have been selected for the prestigious Dale Ride Internship program and will serve this summer in Congress and with various organizations in Washington D.C. This is the first time since the summer of 2009 that six students will be heading back east.

The interns – who come from a wide variety of backgrounds and interests – will gain valuable experience through the eight-week summer internship program, believed to be unique for a community college. They were selected from a pool of 59 applicants, a record number.

Each intern receives funding to cover housing, transportation and a $2,000 in spending money.

Annual funding for four SMC students is provided by The Dale Ride Family Fund, the SMC Foundation President’s Circle, the SMC Associates and the Stratton-Petit Foundation.

Funding for the two additional students has been generously provided by Mrs. Carol Ouchi, SMC Foundation Board member, and Mr. Martin Sosin and the Stratton-Petit Foundation. They each are providing the $5,000 required to send one student to D.C. for the summer.

The program, which is celebrating its 21st anniversary, has sent 117 students (excluding this year’s group) to the White House, Congress and other agencies.

The internship program was established in 1991 in the memory of a man who had a long and distinguished career as an educator, administrator and public servant.

Ride taught political science and served in administrative posts at SMC for 33 years until his death in September 1989 at the age of 67.

Finding inspiration in our parents is not a unique experience, but recognizing humility and contentment within your mother’s smile and actions even as she is working seven days a week to provide for you and your sister is quite unique. This is what inspires and guides Luis to excel in everything he does, from becoming the president of SMC’s honors’ society Alpha Gamma Sigma (AGS), to winning AGS’s newsletter competition, to hosting its statewide convention. Luis hopes to become an officer in the U.S. Air Force.

Making a phone call and turning on a water tap may seem like simple acts, but in Quito, Ecuador, where Sumer spent her 2006 summer in an orphanage, they were life changing. After witnessing the extreme poverty of those who experience a life without basic human needs, Sumer decided to devote her life to public service and social justice. She was determined to make a difference in the lives of individuals at home and abroad, so she volunteers at Generosity Water, a non-profit organization dedicated to ending the current water crisis in third world countries; Friends of the Ballona Wetlands; Heal the Bay; TreePeople; and the Los Angeles Regional Food Bank. Sumer, who plans to be a lawyer, feels it is her responsibility to protect the interests of those who are most affected by inequalities and those who fall into poverty with little to no way out.

When faculty letter writers recognize something in a student that leaves them without a doubt that he will one day be not only a lawyer but a judge, you know that student is special. Maksimilian stands out because he refuses to take a back seat in any aspect of his life. From his engaging interactions in class, to volunteering as a middle-school math tutor or an organizer at the Chron’s and Colitis Foundation of America, Maks’ commitment to working for the betterment of society is as noble as it is inspiring.

We all have our ups and downs, but it’s rare when someone recently out of high school is able to realign himself and achieve so much. After his family’s financial setback, Stuart found himself trying to attend college while sleeping on a couch in his best friend’s dorm room. Not the most conducive situation for good grades, he withdrew until he felt confident to return. Once he did, he hasn’t looked back. Working three jobs full-time seven days a week while maintaining an A-minus average, he also volunteers and participates in SMC student government.

He hopes to pursue a career in law and national politics.

Even before his own life began, tragedy and hardship shadowed Jésus’ future, but it would not define who he would grow up to be. Brought to the U.S. at the age of two, his parents sacrificed everything to ensure that he had what they didn’t have: access to an education. At SMC, Jésus has thrived to become a formidable inspiration and leader. He helped to found “Homeboys at SMC,” a club based on the work of Father Gregory Boyle’s “Homeboy Industries.” Jésus’ group helps to provide pathways for academic success that students may not have at home or in their communities. He also does this work at MEChA de SMC, where he was the Fall 2011 co-chair. Finding inspiration from his tireless father, Jésus wants to provide for future generations of SMC students educational opportunities that might otherwise be closed to them.

Be they individuals living in Mexico or Costa Rica struggling to find a safe place to live, clean water to drink and enough food to eat, or students struggling to pay tuition and buy their books, Harrison sees little distinction. He believes their common thread is a need and desire to improve their lives. As the current Associated Students president, Harrison has devoted his life to “discover the most fulfilling way to restore equity, fairness, justice and sustainability to our public policy at every level.” He has already begun this task by helping to organize for several ballot initiatives, including an Oil Extraction Fee to help fund California education and a consumer rights measure to require the labeling of genetically modified organisms.