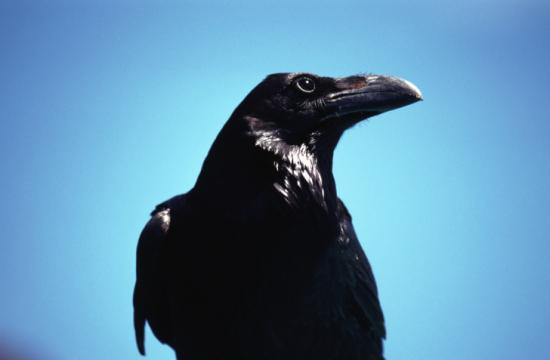 Crow complaints are on the rise in Santa Monica. Neighbors are complaining about early morning loud noise, crows carrying away fledglings from other bird’s nests, crows frightening off other birds, crows eating garbage and crows making messes.

Complaints about crows are not new. Throughout history crows have been labeled schemers, pests, scavengers, tricksters and, even omens of death. Remember the ominous crows in the classic movie, Alfred Hitchcock’s The Birds?

Crows live in large flocks, called “a murder.” This poetic name was recorded in a 1486 essay on hunting, attributed to Dame Juliana Berners, published in the Book of Saint Albans. In it, she lists the names of groups of animals. Ravens and crows get the harshest names. A flock of crows is a ‘murder of crows’ and a flock of ravens is an ‘unkindness of ravens.’

Very harsh compared with names such as, an ‘exaltation of larks’, a ‘charm of goldfinch’, a ‘parliament of owls’, an ‘ostentation of peacocks’, a ‘congregation of plovers’, and a ‘pandemonium of parrots’.

Crows are highly intelligent animals. They make and use tools, recognize individual people by their facial features, and crow vocalizations are being studied as a possible language.

Crow intelligence has been recognized in myth and folklore. Crows were tricksters and ancient ancestors in Aboriginal Australian lore, they were associated with the Irish goddess Morrigan, a crow speaks to Apollo in Ovid’s Metamorphoses, crows are considered ancestors in Hinduism, crows are mentioned in the Buddhist Tibetan disciplines, a crow is said to have protected the first Dalai Lama when he was a baby.

A Native American story tells of the beautiful to hear and see Rainbow Crow who received fire from the Creator and brought it back to earth on a burning stick. The stick charred his feathers and turned the crow black and the smoke and heat of the fire turned his voice hoarse. The crow is honored because he brought fire to keep people warm.

Garry George, Conservation Chair for Los Angeles Audubon, said, “We’ve enabled the crow. Their natural habitat is on open plains with trees for nesting. We’ve replicated that, to a degree, when we changed the coastal desert ecology of Southern California and planted large, open expanses of grass along with large and well-pruned trees and installed sprinklers.

“But crows are predators. They eat fledging birds at the seashore, including least terns, sandpipers, herons and egrets. Audubon would like to see people taking appropriate actions to reduce the incentive for crows to be in our urban areas.”

From the PBS video “A Murder of Crows” we learn about the work of John Mazluff, Wildlife Biologist at the University of Washington, who experimented with crow identification of individual people. He was able to show that crows could not only recognize individual people but could pass that information on to their fledglings. We also see the New Caledonian crows solving spatial problems in order to make tools and to use those tools to get food.

Crows are omnivores who will eat anything from insects, worms, grasshoppers, fruits and nuts, grains, seeds, crops and fish to fledglings, eggs from other bird’s nests, garbage we leave out, dog or cat food left outdoors and all carrion.

If they survive the first few years, and the estimate is that fewer than 50% do, crows can live as long as 20 years. They reach sexual maturity between 3 and 5 years of age, usually mate for life, the mother and father crow and siblings from previous seasons, called ‘helpers at the nest’ take care of the crow fledglings. Crows spend up to 5 years with their parents and family.

“There were always American Crows in this area,” said Kimball Garrett, Ornithologist at the Los Angeles County Museum of Natural History. “When the area was largely agricultural the crows that where here were persecuted and shot because they ate the crops. The crows developed fears and learned to avoid humans.

“When LA become populated, people changed the ecology of the LA basin by planting large expanses of lawns and installing irrigation systems and fountains and pools, by planting many trees. People left dog and cat food outside for their pets. People didn’t properly dispose of garbage.

“As people made the urban areas more habitable for themselves they also made them more attractive to crows. We created an environment that was good for the crows. These changes to the natural habitat allowed an artificial growth in the crow population.”

The crows are now happy here and if reducing their urban presence is our goal, it won’t be easy. There are some obvious things to do. We can be very careful about our garbage, throwing nothing out the window of a car, throwing nothing on the ground, making sure that all garbage is in secure containers. We can feed our dogs and cats indoors.

Or we could do what the City of Chatham, Canada did and bring in a falconer. He used his trained hawks to capture, but not hurt, the crows. Then he released them and the crows did what came naturally to them – they spread the news that there were predators in town. The crows decided it was too dangerous to stick around.

Or we could take the advice of those who say crows are amazing and intelligent and interesting and we could decide to like them.

I’m going to do a little of both. My dog food is coming off the porch and into the house. I’ll let my dog out to bark at the crows if they become a nuisance at my house. And, as a long time environmentalist, I’ll continue to be careful and dispose of all trash correctly.

And I’m going to look at them in a new way. I learned so much about crows just through doing the research for this article that I already have a new appreciation for them. And, I wonder, is it really true that they take care of their elderly parents?