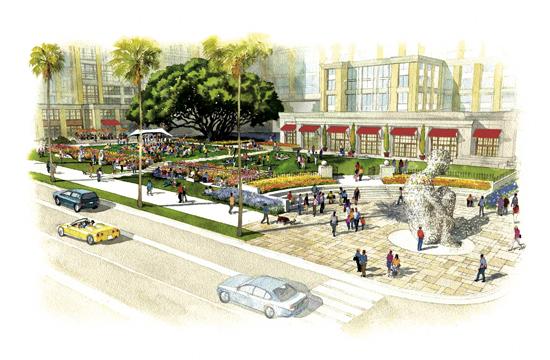 As the debate of whether the Fairmont Miramar Hotel and Bungalows’ proposed revitalization projects continues on in light of the City Council’s recent support of the planned project, one of the key arguments presented in favor of expanding is that the new hotel and condominium facility will bring in millions of dollars to Santa Monica.

With a huge influx of cash, City Hall would have more money to pay for firefighters, police officers, and public schools, among basic infrastructure items, proponents of the Miramar revitalization project claim. Other economic benefits include prospects for local hiring and union jobs as well as planned affordable housing units and possible childcare tuition subsidies.

A website dedicated to advocating Miramar’s proposed expansion and revitalization stated the new plans “will generate a significant increase in the transient occupancy taxes and other revenues and taxes paid to the City of Santa Monica.”

According to the PKF Consulting study, the firm states “a total impact of approximately $12,750,775 in a representative year in 2011 dollars for the hotel revitalization, (which) equates to an increase of approximately 117 percent.”

“It is our opinion that the proposed hotel expansion would bring significant incremental fiscal impact to the City of Santa Monica,” the fiscal impact analysis stated.

PKF Consulting based its analysis on several numerical factors, such as: 14 percent transient occupancy tax rate; tax contribution of 1.5 percent of retail sales; utility taxes of 10 percent each for electricity, gas, telephone, and water, respectively; a weighted utility tax rate of 9.5 percent; a parking tax of 10 percent; and, a business tax assessment of $180.80 for the first $60,000 of gross total revenues, then $1.25 per $1,000 of gross total revenues above $60,000.

Adjusting for the recent dissolution of redevelopment agencies, PKF Consulting estimated “the City’s incremental tax revenue would approximate $5.1 million per year and approximately $48 million over the first 10 years.”

Not factored into the PKF Consulting study were: indirect tax impacts; potential upside of a condominium rental pool program; additional real estate tax revenue from condominium re-sales; and, the “incremental impact from the eventual sale by Ocean Avenue LLC of the revitalized hotel, which would also likely result in a significantly higher assessed value.”

“While the existing facilities present a high level of construction quality and upscale facilities, the proposed revitalization will feature higher-end luxury construction and lavish hotel facilities comparable to the top tier of Beverly Hills hotels,” members of PKF Consulting stated in its study.

Though the consulting firm states it is relying upon direct tax impacts and, by 2020, an assumed 81 percent hotel occupancy rate and an Average Daily Rate (ADR) of $818 per room, opponents of the proposed Miramar expansion and revitalization do not see the project through rose-colored glasses.

Attorney Rick Zbur of Latham and Watkins told The Mirror that the PKF Consulting study is too optimistic.

“Their TOT projections, we think, are wildly optimistic,” Zbur told The Mirror, adding that the Miramar is forecasting an ADR at $624 when the new Miramar opens in 2016. Currently, the Miramar’s ADR is at $300 per room and current occupancy rates are at 80 percent.

“The (proposed) ADR rates would be among the highest in the state,” Zbur added.

Interestingly enough, developer and Miramar affiliate MSD Capital L.D. CEO Alan Epstein told The Mirror the financial impact analysis is not an idealistic, rosy forecast but instead something “we believe in.”

“We would not be taking on a project of this significance unless we believe the fiscal impact would be achievable,” Epstein said. “We went to a third party to see if they could validate the numbers, and they did.”

If the Miramar’s proposed revitalization project is ultimately approved by the City Council, construction is expected to begin at the corner of Wilshire and Ocean Boulevards in 2016.

Current plans call for the Miramar to reduce the number of hotel rooms from 302 to 265, but increase the total square footage of the property’s facilities from about 262,000 square feet to more than 556,000 square feet. Retail, restaurant, and spa space would all be expanded by at least three times the current size. Up to 120 private residences would be added.

The Miramar’s Palisades Wing was the hotel’s original building and opened in 1927. About 30 years later, in 1957, the Ocean Tower was added. The bungalows had been progressively worked on between 1920 and 1946 before being refurbished in the 1990s, according to PKF Consulting.

“Everyone agrees the hotel needs to be revitalized and it probably is on the most prominent corner in the city,” Epstein told The Mirror. “It has to be fantastic. Not good, but fantastic.”