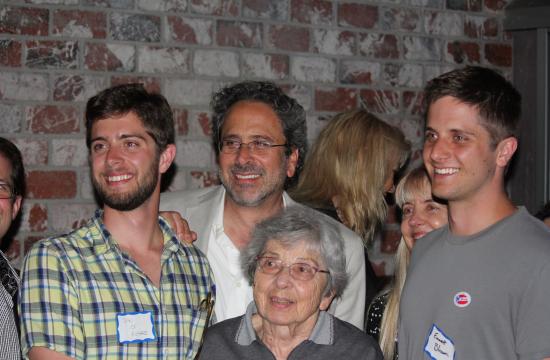 In what may have been one of the closest races in all of California, less than 800 votes separated the four candidates vying for the state’s 50th Assembly District, which includes Santa Monica.

When the dust settled Wednesday morning, Democrats Betsy Butler and Richard Bloom claimed the top two spots in the June 5 primary vote, setting up a face-off between the sitting Assembly member and Santa Monica Mayor at the general election on November 6.

Butler, the 48-year-old incumbent who currently represents the 53rd District in Sacramento, finished atop the candidate list with 12,519 votes (25.9 percent). Santa Monica Mayor Bloom was only 102 votes behind Butler (12,417 votes, 25.6 percent).

The Mirror contacted Butler’s campaign team on Wednesday and Thursday, but she did not want to comment on Tuesday’s results.

Bloom told The Mirror that the tightness of this week’s primary vote would set up an even tighter race in November.

“I’m thrilled to be in the runoff and I feel honored given the competition,” Bloom said. “As the campaign moves into the next phase, I will continue to emphasize my experience in office, professionally and as a neighborhood leader as well as my many accomplishments on the environment, education and other issues. Most importantly, I will underscore the need for our state to follow the Santa Monica-style model of success, by adopting fiscally prudent practices while encouraging responsible business to flourish and generate revenue for our important priorities.”

Osborn, a first-time candidate who positioned herself as an “activist with an MBA,” said while she did not win, her campaign brought a lot of “energized” an invigorated people into the political process. It was because of that energy and vigor, she observed, that the election was so tight.

“It was a very close race. I think that shows a vigorous competition all the way around. We energized hundreds of people. We built a broad coalition,” Osborn told The Mirror.

Republican Brad Torgan, an environmental attorney who formerly served as chief counsel of the California Department of Parks and Recreation, finished fourth with 11,730 votes (24.2 percent).

“I think a lot of people are surprised by how close the race was,” Torgan told The Mirror. “When you look at the other three candidates — I think Democrats had a tough time making a choice. With my campaign, if you look at the numbers, I appealed to more than just Republicans.”

Meanwhile, the two state propositions on the ballot were split, with Proposition 28 overwhelmingly approved by voters and the controversial Proposition 29 narrowly defeated.

The other ballot measure – Proposition 29 – was narrowly defeated, with 1.95 million votes (50.8 percent) against the proposed $1 cigarette tax increase; 1.89 million (49.2 percent) voted in favor.

Perhaps the most controversial issue on the primary election ballot, Proposition 29 sought impose a five-cent tax on each cigarette distributed – or $1 per pack – “to fund cancer research and other specified purposes.”

Proposition 29 proponents argued the cigarette tax would raise as much as $735 million annually in revenues by the 2013-2014 fiscal year and another $50 million in annual revenue is forecast via the tax on other tobacco products, with a net increase of $10 million to $20 million annually in state and local sales tax revenues.

However, there was a slew of advertorial campaigns claiming Proposition 29 to be a major boon for cancer research or the latest in a string of government waste programs.

Voters handily approved a pair of measures on the county level. Measure H, which sought to extend a tax on guests staying in hotels located in unincorporated areas, received 411,538 (60.4 percent) in favor and 269,698 (39.6 percent) against.

Similarly, Measure L, which sought to continue a tax on landfills operating within the county’s unincorporated areas, was overwhelmingly approved with 425,383 (62.7 percent) in favor and 252,653 (37.3 percent) against.

The general election, which will pit President Barack Obama against Republican nominee-to-be Mitt Romney, will be held on November 6, 2012.

All results cited courtesy of the California Secretary of State’s office.