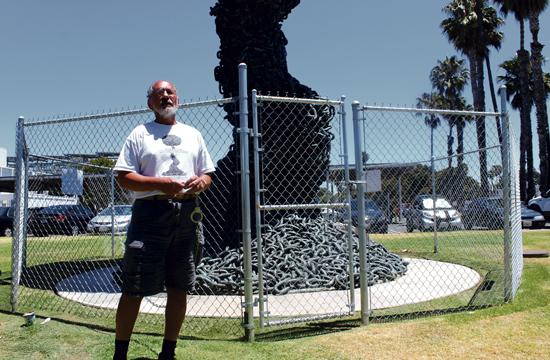 Long-time peace and anti-nuclear activist Jerry Rubin began a 10-week liquid fast Tuesday to help save the sculpture “Chain Reaction” by symbolically chaining himself to the fence surrounding the art piece that has been in front of the Civic Center for more than 20 years.

The Santa Monica City Council voted to remove the sculpture by November, citing safety concerns, unless the required $250,000 can be raised to pay for making the statue safer.

The anti-war monument, created by three-time Pulitzer Prize winning political cartoonist Paul Conrad, is something that Rubin believes is not only important, but quintessentially Santa Monica.

“We have to strengthen the anti-nuclear movement,” Rubin said. “This is a piece that is about education, and is totally Santa Monica.”

Rubin is no stranger to fasts, and says he has done well over 30 before.

His friend Chuck Levin, who was present at the symbolic chaining, believes that Rubin is continuing to do what is right.

“This is another in a long line of contributions that Jerry’s made to the city of Santa Monica that he loves,” Rubin said. “Ultimately, I think he’s on the right side.”