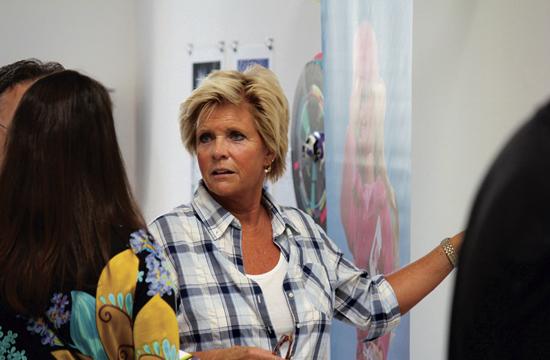 Art connoisseurs and first-time buyers came together on Sunday for an enthralling exhibition, charity event, and auction called Art for CLARE that featured works from emerging artists Meredith Baxter, Francine Fanali, Jay Kelly, and Joe Goode among others.

Buyers perused the gallery and placed silent bids on art to secure their investments.

All the emerging artists donated at least half the proceeds from the sales to the CLARE Foundation, but some artists such as Baxter and Goode donated all their proceeds.

“Today is an event where artists have donated their works in order to support CLARE’s effort to help people recover from the diseases of addiction and alcoholism,” said Nicholas Vrataric, CLARE Foundation Executive Director. “We get restaurants to come in and donate their food, we have a silent auction where people donate a lot of things, and all of this to help with the funding in a really difficult time for social service programs.”

Baxter, an actress, writer, and artist who is on the board of the CLARE Foundation attended the event to talk about her piece.

She said she likes her paintings “loose” and with “something specific” so that she can find a nexus between motley items. This can be seen in her decision to superimpose a figure of a clown inside her Neo-Dada Combine painting, Abstract with Clown, 2011.

Baxter explained that her works are “not planned.”

“As I am creating something, I might have a variety of things and ideas with an image that I’d like to put,” said Baxter, who gave her clown a “moment of control,” inside of her painting. “The clown was one of many that I had made from other paintings that I had torn up and only wanted part of, and I put him in there and thought, ‘he fits!’”

Pop Artist Goode in his 1994 black and white piece Study for Cause and Effect Painting 1, displays a nebulous splatter of sumi ink on washi paper, contains the possibility of endless interpretations and seems to cry out for psychological analysis.

Kelly’s pieces Of Real Enjoyment 2011 and Lucky Old Sun 2011 are both collages and resin on panel.

He uniquely styles his sublime portrait collages out of books, photos, and magazine mixing together photography and painting with imagery and text to create a moment of nostalgia in a beach-styled setting.

Fanali designed her submission using an iPad 2 drawing with a Brushes program to create her piece Untitled 2012, and this brought a novel view of how art can be created with modern technology found in the world of art today.

“When you take a picture it’s hard to see the values and the colors from the photo so I play around with it layer upon layer and with that program,” said Fanali whose Untitled 2012 beach art submission is a reflection taken from a photo snapped on Palisades Avenue overlooking the bluffs in Santa Monica. “I love this because it’s easy for me to erase and go back and make changes with the Brushes program.”

The event grossed about $50,000 to support CLARE’s programs, and about 50 of the 80 pieces on display were sold.