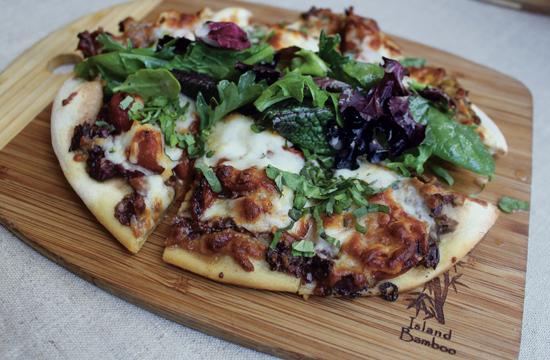 Only a stone’s throw away in “the village” area of Pacific Palisades sits Maison Giraud, a new bistro in the spot previously occupied by Dante Palisades Restaurant.

At the helm of the restaurant is French-trained chef/owner Alain Giraud who has many ties to Santa Monica.

He was responsible for opening the Provencal-style eatery Lavande at Loew’s Santa Monica Beach Hotel in 1998. More recently, he was the head chef at Bastide in West Hollywood and Anisette in Santa Monica (both now closed), before opening his own place.

He said it was finally time for his own venture to start from scratch, which took about two years of planning, permitting, and construction before he opened Maison Giraud in November last year.

He said he brings his French roots to the restaurant.

“The restaurant is simple, affordable, and with a good twist,” Giraud said.

“We open for breakfast, for lunch we have salad and sandwiches, and dinner we wanted something very affordable. We have a very easygoing menu but on the side, if you want a 10-course menu, I can do that as well.”

One of his favorite starters is the white gazpacho.

“I love the story about food,” he said. “A traditional gazpacho came about when the Spanish found a way to use old bread. They have tomato and olive oil in Spain, so they would marinate that all day then blend it with red bell peppers and it gives you a red gazpacho.

“For a white gazpacho, a little bit of bread is soaked with cucumber juice, grape juice, some olive oil, and you blend it. No cream, no dairy. It’s simple, but it’s a good way to start a meal.”

He was also excited for the bakery.

“Our bakery is more French than the restaurant,” he said. “We have croissants, all the pastries, and the baguettes,” he said.

Giraud said he visits the Santa Monica farmers markets on Wednesdays and Saturdays for the freshest ingredients.

“Southern California is like south of France with the same type of weather,” he said

“California is amazing because you have so much variety. You still have all the citrus, now you have the stone fruit with peaches and apricots as well.”

“We keep a scallop dish on the menu all the time,” he said. “It has a sauce made from pistachios served with leeks. My job is to keep a balance between what people like, what we like to do and we know the way to do it, and keep it very nice. We don’t want to be doing everything and nothing good.”

Giraud is one of hundreds of Southland chefs against the forthcoming ban on foie gras, which takes place in California on July 1.

Before the ban takes effect, he has created a Sautéed Foie Gras dish with turnips, fava beans, and blood orange. He has also created a Duck Terrine that’s served with house-made country bread and whole-grain mustard.

Giraud’s wife Catherine has the shop next door to the restaurant, which features linens, goods, and products from Provence, matching much of the fare served at the bistro.