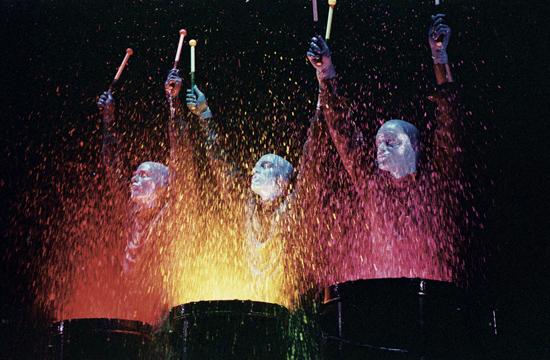 Best described as a whacked-out science fair, Blue Man Group at The Venetian in Las Vegas comes across as a bizarre variety show that mixes music, comedy, and multimedia themes.

The show – which can also be seen in New York, Boston, Chicago, Orlando, Berlin, and Japan – revolves around a trio of odd Blue Men who have blue skin and no voice, hair, or ears.

These Blue Men perform a range of talents such as percussion, acting, and non-verbal commination while displaying personality traits of openness, high charisma, and willingness to collaborate.

While variety shows of decades ago may have used juggling or sword swallowing to capture the attention of the audience at the start of the show, the Blue Men catch marshmallows from a great distance at high speeds to well-timed sound effects to the act.

While the characters are similar in looks, each strives to be an individual while trying to find the sweet spot of being in this group.

Audience participation is also part of the show. In one act, the three Blue Men have a meal with a guest selected from the audience.

It is during this act where the audience sees the Blue Men have a physical characteristic that puts them in a vulnerable situation: each has a chest hole. One of the Blue Men’s holes cannot stop spurting paint while everyone else is trying to eat. This incident is an example of the innocence of the Blue Men. It’s an embarrassing scene for the audience to watch, but it’s life as usual for the Blue Men who scrape the colorful thick streams of paint onto their plates and begin to eat it, which brings a loud roar of laughter from the audience. The female guest, who is placed into a modified Blue Man vest when she goes up on stage, brings more laughter to the theater when her chest hole also starts exploding colorful paint onto the dinner table.

Since there is so much colorful paint in the production, audience members in the front few rows are given ponchos, which are definitely needed unless you want to leave the show covered in bright yellow, blue, or red paint.

One of the signature acts is when the Blue Men are intensely drumming when their chest holes come into play again and begin to pour paint into their drumming contraptions. With each beat of the drum, vibrant bright colors of paint spray high above the stage.

The paper finale frenzy is sensory overload that is something you have to experience as an avalanche of recycled paper rolls in over the crowd. The theater becomes a dance party as the Blue Man make loud music to strobe lighting while the paper takes a few minutes to make its way from the back of the theater to the front of the stage.

Ticket prices for the show start at $59 plus tax and service fee.