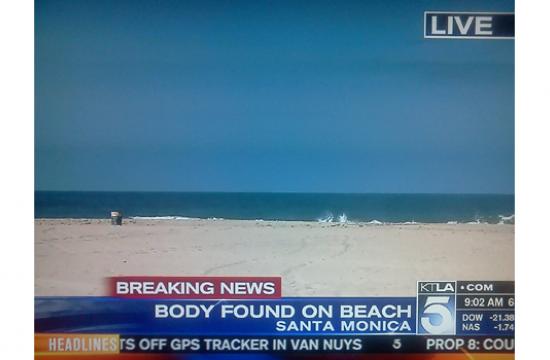 The body of a white male aged late 30s to maybe 50 years old was found face down in the water line of the 2800 block of Santa Monica beach this morning.

SMPD Sgt. Richard Lewis said at 5:30 a.m. one of its parking enforcement officers was flagged down by a citizen in the 2800 block of Barnard Way in the beach parking lots.

Lewis said the citizen informed the officer that they believed there was a body washed ashore in the waterline in the 2800 block of the beach.

“The parking enforcement officer relayed the information and the harbor guards responded out and confirmed it was a deceased male lying face down in the water line,” Lewis said.

“Officers responded and cordoned off the area.”

The subject appeared to be wearing either a cycling or body surfing shirt, and board shorts, Lewis said.

“There’s no obvious signs of trauma to the subject,” Lewis said. “The coroner has responded and taken possession of the body. We’re going to wait for them to identify the subject and cause of death after an autopsy is done.”