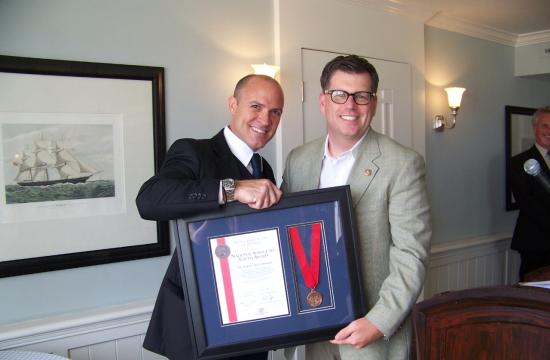 The Boys and Girls Clubs of Santa Monica honored past chairman Bud Pernoll and welcomed new officers and members of their Board of Governors at their Biennial Luncheon on Monday.

About 40 board members and staff from the Boys and Girls Clubs of Santa Monica attended the event at Shutters on the Beach where incoming chairman Bill Dawson was welcomed.

Four new board members were also introduced: Andi Plocek, Christopher Harding, Maria Stamolis, and Richard Grad. They have been appointed to the Board for 2012-2013.

The Board of Governors assists in the general governance of the organization and helps to make decisions on matters relating to resource development, operations, management and support services.

The Boys and Girls Clubs of Santa Monica is a 501(c)3 non-profit organization dedicated to providing youth a safe and productive place to go when they need it most: after school and non-school days.

Each board position is a one term, two year position. Each member is encouraged to commit to volunteer service and must truly be devoted to making a positive impact on the community.

Andi Plocek is the Director of Communications at SolarReserve, where she leads the company’s communication efforts to develop and build large-scale solar energy projects in the US and worldwide. SolarReserve’s leading technology includes integrated energy storage that can deliver clean renewable electricity on demand – day or night.

SolarReserve has more than 3,000 megawatts of projects in development across the US and internationally. Plocek has 10 years of experience in the environment and renewable energy industry, leading non-profits, associations and energy start-up companies in their communication strategies to address climate change, energy diversification, corporate and social responsibility and education campaigns to bring renewable energy into the mainstream

energy market. Plocek has helped lead environmental non-profits and renewable energy companies from their start-up stage to reputable, market-leading organizations. Most recently, Plocek led the communications and political strategy to successfully build the nation’s largest solar power plant with energy storage, and the first of its kind at this scale in the world – a $1 billion dollar project that is creating over 4,500 jobs across the United States.

Maria L. Stamolis is a Managing Director for all Fund platforms at Canyon Capital, and her responsibilities include development/redevelopment, oversight of marketing/sales/leasing programs and day-to-day field operations. Maria is also responsible for negotiating and executing financing/refinancing and disposition transactions.

Maria has over 22 years of real estate experience in development, lending, workouts and restructures, and portfolio and asset management. Prior to joining Canyon, she was as a Consultant and Executive Vice President for Karney Management Company, a Los Angeles-based developer and owner of over 7 million square feet of industrial property. Prior to Karney Management, Maria was Head of Asset Management and Vice President at the Los Angeles-based firm RandB Realty Group/Oakwood Worldwide, the then-owner/operator of a $1.5 billion real estate portfolio comprised primarily of large-scale apartment communities. Ms. Stamolis also worked as a Portfolio Manager at GE Capital in Irvine and prior to that at MBL Life Assurance Corporation in Newark, New Jersey and in Los Angeles as a Workout Specialist.

Christopher M. Harding practices primarily in land use law, involving the use and development of commercial, hotel, residential, mixed-use and institutional properties. He has extensive experience in land use and related litigation, including appellate and California Supreme Court cases.

Richard Grad is global co-chair of the firm’s Financial Services Class Action Litigation Practice Team. He has practiced with the firm since 1985, becoming a partner in 1991. His practice focuses on complex civil litigation with particular emphasis in the fields of class action defense, RICO, antitrust, securities, patent and intellectual property litigation. Mr. Grad has served as lead counsel for numerous financial institutions and other large corporations, including First Data Corporation, Wells Fargo Bank, The Western Union Company, The Hartford Financial Services Group, Inc., Mutual of Omaha, Orlandi Valuta, TeleCheck, and Cardservice International in nationwide and international class actions involving such issues as credit card services, money transfers, banking, financial services, insurance, consumer disclosure, and intellectual property matters. This work has included representing defendants in some of the largest class actions ever filed in U.S. courts, involving tens of millions of putative class members and billions of dollars in alleged damages. Grad has been involved in successfully defeating class certification motions in both Federal and State courts.