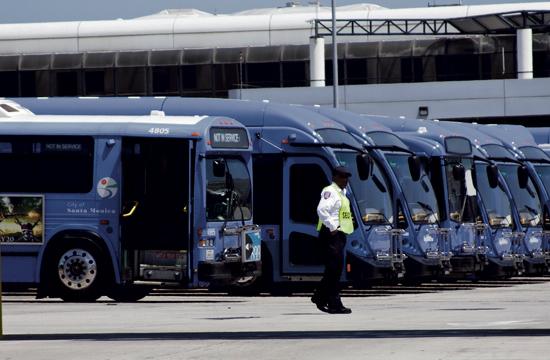 Two Big Blue Bus (BBB) routes were cut or eliminated last Tuesday evening, as the Santa Monica City Council unanimously voted to scale back the services of Route 2 and Rapid 10 in the Ocean Park neighborhood.

As of August 26, Route 2’s will be truncated south of Fourth Street at Pico Boulevard and six Rapid 10 trips operating between Main Street at Marine Street and Second Street at Colorado Avenue will be eliminated.

The changes were made due to limited ridership on the respective routes and would save City Hall, staff estimates, about $275,000 annually.

“Since 2009, we’ve had some very big challenges to our revenue,” Transit Services Director Edward F. King said in prefacing the need to truncate the two routes in order to save both the BBB and City Hall some money. “State transit assistance dropped by over 50 percent, from roughly $6 million to $3 million a year.”

“The problem we have, unfortunately, is we don’t have unlimited resources and we can’t really continue to subsidize the bus,” Mayor Pro Tem Gleam Davis said. “In order to keep our fares at a reasonable level, we have to be as efficient as we possibly can. We can’t continue to subsidize under utilized routes because that ultimately penalizes everybody who wants to use the system.”

According to staff, Route 2 south of Pico Boulevard “has declined to an average of 17 passengers per Revenue Service Hour (PRSH) or three passengers per bus” since August 28, 2011.

Line 2 as a whole has a PRSH of 32, which is slightly under system-wide rate of 39 passengers per Revenue Service Hour.

“The resulting subsidy paid by the Big Blue Bus for trips south of Pico is $4.25 per trip,” staff added. “The subsidy per trip system-wide is $1.98.”

According to City Hall, the segment of Route 2 south of Pico costs Santa Monica $191,000 per year.

In truncating or cutting services for Route 2 and Rapid 10, staff added BBB patrons in the area might alternatively use Routes 1 or 8 to get around.

“System-wide, BBB service needs to be more productive as measured by the number of passengers per hour and mile and more efficient,” staff said. “The alternative to continuing to operate unproductive and underperforming service would be to significantly raise fares between 50 and 75 percent for all BBB service.”

Beyond changes to a pair of service lines, council members also approved two BBB agenda items as part of its June 12 consent calendar.

The City Manager was authorized to enter into negotiations with LECIP, Inc., a company based in Japan but with offices in Illinois, to install and upgrade new automated fare boxes on BBB’s vehicles. The service contract would be worth $7,223,512.

“The fare boxes installed on the BBB vehicles are 15 years old and have exceeded the manufacturer’s recommended useful life,” staff said. “By purchasing new, state of the art automatic fare boxes, BBB would be able to offer advanced technologies to its customers that are not currently available including the introduction of smart cards, a mobile ticketing application, and colorized fare box display screens.”

As part of the purchase, the new fare boxes come with a two-year warranty, training, installation, and all hardware and software.

According to staff, funding for the fare boxes will come from use of federal grants and state and county transit sales tax capital funds. Installation will require up to 22 months.

Finally, the council also approved as part of its consent calendar the renewal of the BBB “Any Line, Any Time” unlimited ride transit program for Santa Monica College (SMC) students.