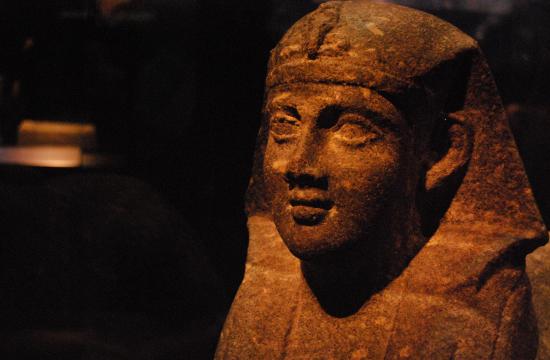 If the Roman Empire had entirely succeeded in its plans to rid Egypt of all things Cleopatra, the California Science Center would have an entirely different display in its third floor exhibition space.

A myth that has served as the story lines of many a film, novel, and stage production would have remained just that: a myth.

Alas, about 150 pieces of Egyptian artifacts “illuminating the life of Cleopatra VII” fill this very space of iconic museum a few miles south of the downtown Los Angeles skyline.

For the next few weeks, patrons will view large statues and little statuettes, illuminating jewelry, once-valuable coins, and elaborately handwritten notes that were once housed in Cleopatra’s lost palace in Alexandria.

Featuring eight galleries, a four-minute movie, and an IMAX experience, “Cleopatra: The Search For The Last Queen Of Egypt” elaborately connects viewers with a big slice of infatuated and nostalgic history, one that preceded us by several centuries yet has lived mightily through countless tales of an enigmatically fascinating woman.

Courtesy of a pair of recent land and sea excavations, the artifacts selected for display at the California Science Center provide visual cues of Cleopatra’s rule, ancient Egyptian life, and a dose of what once was during the Ptolemaic period.

Considered lost for nearly 2,000 years before being discovered in Egypt and of the coast of France, “Cleopatra: The Search For The Last Queen Of Egypt” is organized into eight galleries, the first of which features an imposingly large statue of a Ptolemaic queen.

It is unclear whether the depicted queen is Cleopatra, but the statue and first gallery set the tone for the remainder of the exhibition. It is here where patrons are introduced to Cleopatra’s life.

Gallery number two focuses on several underwater finds and features the once lost ruins of ancient Alexandria, while the third gallery delves into the personality of another submerged city in Canopus.

Artifacts featured in the Canopus section include gold jewelry and coins as well as representative pieces of Osiris (God of the Afterlife).

One of the more memorable artifacts of the Cleopatra exhibition can be found in the fourth gallery, which highlights the city of Heracleion. There, at the city’s Temple of Amon once resided a pair of 16-foot behemoth statues of a Ptolemaic king and queen.

Hercaleion was the city where the newest Egyptian pharaohs were crowned and a vital location when it came to Egypt’s military defense strategies.

For a precursory idea of everyday life in Alexandria during the days of Cleopatra, Gallery number five features the bust of a sphinx, a statute of a high priest, and an impressively large stone head of Cleopatra’s son Caesarion.

Over at gallery six, highlights include a female headless sculpture and a reproduction of a papyrus document that features the only known example of Cleopatra’s handwriting.

The seventh gallery focuses on artifacts discovered in the search of Cleopatra and Marc Antony’s tomb, while the eighth gallery is the penultimate stop with a montage of Cleopatra’s images in art and popular culture.

An IMAX film, Mysteries of Egypt, runs concurrent with the exhibition and shows daily at 10:30 a.m., 1:30 p.m., and 3:30 p.m.; a 5:30 p.m. showing is available on Saturdays and Sundays. Tickets may be purchased for the exhibit or IMAX separately or as a package.

National Geographic and Arts and Exhibitions International organizes the exhibition; The Egyptian Supreme Council of Antiquities and the European Institute for Underwater Archaeology also contributed. Dr. Zahi Hawass on land in Egypt and Frank Goddio off the coast of France provided the artifacts.

The 13,000 square foot exhibition runs through Dec. 31, 2012 at the California Science Center, which is located at 700 State Drive in Los Angeles, just south of the University of Southern California. Adult tickets are $19.75 for general admission and $12.75 for members.