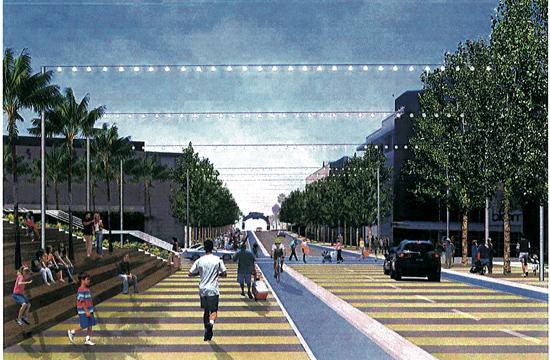 One of Santa Monica’s most ambitious redevelopment projects may have to be a little less ambitious, as the Planning Commission considered an altered Colorado Esplanade on Wednesday night that could save City Hall millions of dollars.

Though Planning Commissioners did not vote on the issue, City Hall has put into motion a discussion of how to develop a potentially iconic project without having to break the bank.

City Hall can thank the revocation of Redevelopment Agency (RDA) funding earlier this year for having to consider scaling down the Colorado Esplanade.

“Due to the challenges of budget changes and many competing CIP projects, the project budget was reduced,” a staff report to commissioners stated. “City staff and the design team have been evaluating cost savings and funding strategies that will allow the Colorado Esplanade to be constructed to address the critical circulation and mode balance changes that accommodate the Expo Light Rail and meet the expectations of the community and stakeholders without compromising the quality of iconic place-making.”

“It is a refinement” of the original plan, Principal Planner Sarah Lejeune added.

Prior to Gov. Jerry Brown’s successful campaign in eliminating the RDA, City Hall had expected to be allocated $10 million in redevelopment money and an additional $3.3 million from a Metro grant to fund the Colorado Esplanade project.

Now that RDA funding has dried up, City Hall expects the Colorado Esplanade to be built at about half that price.

The project will still be able to move forward thanks to City Hall’s willingness to rely on some funds coming from its capital reserves.

Among some of the changes that could be made: altering the types of trees that are planted at and around the Colorado Esplanade. Commissioners were vocal about staff going through a deliberate process to decide what types of trees would ultimately reside in the area immediately surrounding the project.

Specifically, Commissioner Richard McKinnon said any tree that is ultimately chosen should complement the Moreton Bay Fig Tree that is by the Colorado Esplanade.

Commissioners were also concerned of potential renovations plans of the Holiday Inn on Colorado and Second Street and whether the Pier signage would be visible as future Expo Line riders exit the trains near the Esplanade.

Yet another issue: wayward finding.

The Colorado Esplanade is considered a priority project by City Hall, primarily because of its location adjacent to the final stop of the Expo Line. With hundreds of passengers expected to detrain at the Esplanade, City Hall wants the project to make a lasting impression on those who arrive into Santa Monica via train from Los Angeles and beyond.

Once complete, plenty of bicycles, pedestrians, public transit, and vehicular traffic will converge upon the Colorado Esplanade.