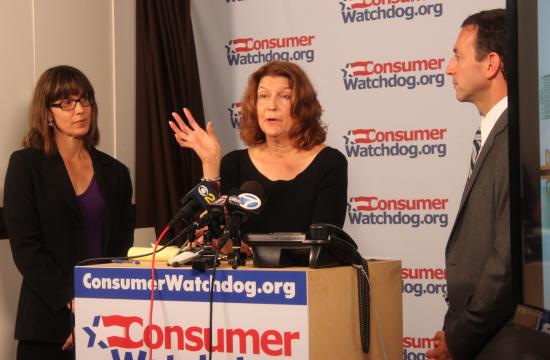 A class action lawsuit was filed today against health insurer Blue Shield that alleges the company is illegally pushing customers with pre-existing conditions into low quality, low benefit, high deductible insurance policies, and even causing some clients to end up uninsured.

“Blue Shield issues enormous rate hikes and the threats of rate hikes on these customers to illegally force them into a predicament that no one should have to accept,” Heller said at the press conference. “These are loyal customers, people who have been Blue Shield customers for years, who pay for their policy month after month, year after year. But now Blue Shield is leaving them unprotected when they need their healthcare the most.”

According to Heller, the lawsuit, which is filed specifically on behalf of Californians who buy their own health insurance, seeks to stop Blue Shield from forcing its policy holders into what is known as a “death spiral.”

“Death spiral” is term used to describe when a health insurer closes certain insurance policies to new customers and later raises rates to those remaining in the closed policy until the original customers can no longer afford coverage. This forces customers stuck in the old policies to pay higher rates or move into policies with less coverage.

According to Heller, Californians are supposed to have the right to switch to comparable policies in these situations, which has not been the case with Blue Shield.

“It’s very clear – the health insurance death spiral is absolutely illegal in California. You can’t do it,” Heller said. “(Blue Shield) is refusing to follow the rules that are set forward, that are clear, that are very simple for the insurance companies to comply with but they are not doing it.”

At the press conference, Pressley said the lawsuit is both seeking an injunction that would stop the July 2 closures, as well as relief from the court to allow those who have already been affected to get comparable coverage from other policies that Blue Shield offers. The lawsuit also seeks to refund customers who paid higher rates as a result of “death spiral” practices.

“We’ve been getting many complaints on this issue, its not just Blue Shield,” Pressley said. “We’ve actually previously brought a successful lawsuit against Blue Cross for these very same practices, and as a result of the settlement of that case, Blue Cross was forced to offer rate deductions and rate caps going forward that will more smoothly bring about lesser increases in the future, as well as provide opportunities over the next three years for customers to switch to comparable policies. We’re hoping to accomplish similar goals with this lawsuit.”

Santa Monica resident Deborah Goodwin spoke at the press conference. She told reporters that she has been a Blue Shield customer for more than a decade.

When she was diagnosed with a serious but treatable eye condition several years ago, she said she found herself fighting Blue Shield for the care that she needed to save her vision.

“Now I find out that they’re planning to close my policy to new customers, trapping me in a death spiral as premiums increase over time,” Goodwin said. “Blue Shield is supposed to offer me new, open coverage that provides benefits that are comparable. But the only policy available to me now is one that has a high deductible and offers more bare bones coverage. Blue Shield tells me that I will be allowed to stay in my policy, the death spiral, but how long will it be before the rates go up, and how long will I be able to afford these increasing premiums? I’m not sure that I’ll be able to get the care that I need, that I’ll be able to afford it.”

“The allegations are false,” the company said in a statement. “We comply with all aspects of the block closure law and have since it was enacted.”