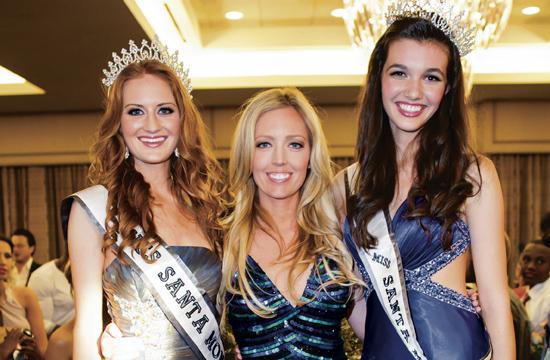 The smiles lit up for the cameras as young women from around the area competed in the first annual Miss Santa Monica USA on Sunday.

Held at the Sheraton Delfina Hotel in Santa Monica, about 40 contestants competed in front of more than 400 friends and family members.

Fletcher, 22, hopes to one-day make her way to New York to be on Broadway.

She currently attends the University of Southern California and is majoring in Opera. She is the winner of Kiwanis Classical voice competition and a member of the Golden Key Honor Society and is on the Dean’s List. She also loves learning about cross-cultural music and believes in fostering therapeutic musical expression in others.

Krasnoff is a 15-year-old ballerina from Rancho Palos Verdes.

She speaks English, Russian, and French and is currently learning a few other languages.

In addition to ballet, she enjoys many sports, singing, playing the piano, and reading. Krasnoff said she stands against any abuse of drugs and alcohol and will work to spread the word to teens in Santa Monica throughout her reign.

Erick Macek, a recent contestant on NBC’s “The Voice,” and the band Pullman Standard entertained the crowd.

In addition, there were many other fabulous prizes and opportunities for the winners as well as all of the other participants.

The prize package is worth over $10,000 in goods and services.

The local charity partner for Miss Santa Monica this year was the Boys and Girls Club that strives to significantly enhance the lives of all youth to fulfill their potential as caring, productive, contributing citizens. A portion of the proceeds have been donated to the Santa Monica Boys & Girls Club Smart Girls Program.

Bradford recently opened Crown Diva Boutique on Lincoln Boulevard, which is a one-stop shop for all pageant and prom needs.

She also owns the Miss Malibu pageant and is proud to host the eighth annual event at the Malibu Golf Club on August 19.