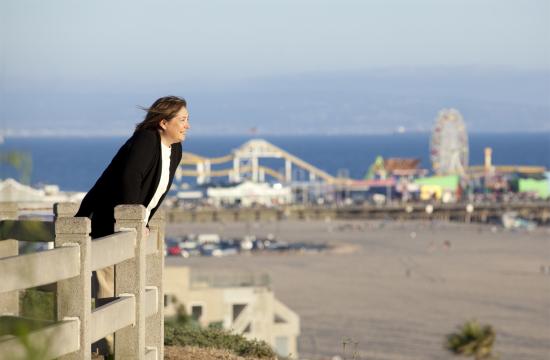 Davis joined the Santa Monica City Council in 2009 when the Council selected her to fill the seat left vacant by the passing of Herb Katz.

Davis was formally elected in 2010 to a two-year term.

With many years of service to the City of Santa Monica prior to her City Council appointment, Davis served as a member of the Santa Monica Planning Commission and was Co-Chair of Santa Monicans for Renters’ Rights (SMRR).

Active in the community since 1985, Davis began her public service as a member of the Board of Directors of WISE Senior Services, and has chaired numerous organizations since then, including the Santa Monica Child Care and Early Education Task Force and the Santa Monica-Malibu Unified School District’s Facilities Bond Advisory Committee.

As a member of the Santa Monica City Council, Davis said she has championed the inclusion of affordable housing for seniors and families as a high-priority community benefit in development agreements.

Davis said she has worked with non-profit and veterans’ organizations to lobby State legislators to create a stable funding source for veteran, senior, and family housing.

She said she worked to extend the term of the Facilities Use Agreement with SMMUSD beyond its expiration in June 2012, and championed the Civic Center Joint Use Agreement for renovation of the Santa Monica High School campus, which will provide additional recreational opportunities for residents throughout the city.

She supported the City’s plastic bag ban, its strategy for water self-sufficiency, and greener building standards.

“In my next term, I will continue to fight to keep our Police Department and Fire Department the best in the county,” Davis said. “And I want work to ensure that Santa Monica’s mix of housing, including affordable housing, meets the needs of all residents. Just as important is the need to keep Santa Monica moving on its path to economic, environmental and human sustainability, including ensuring the City’s continuing economic strength in this difficult and tenuous economic climate.”

Davis graduated from Harvard Law School in 1981 and from USC in 1978. She was born in Los Angeles and grew up in San Gabriel and Arcadia. Davis and her husband, John Prindle, have one son, Jackson, who is 15 years old.

For more information about her campaign, visit www.gleamdavis.com.