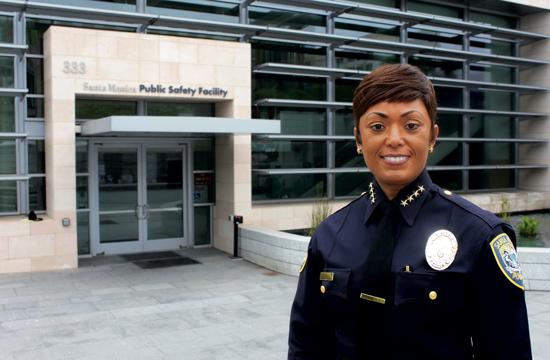 Excited, enthusiastic, and optimistic – that’s how newly sworn-in Santa Monica Chief of Police Jacqueline Seabrooks describes the feeling of taking the helm of the department, replacing Timothy Jackman who retired earlier this year.

In a sit-down interview on level four of the Public Safety Facility this week, Seabrooks spoke one-on-one with The Mirror about becoming the City’s 17th Chief of Police after serving four-and-a-half years as the City of Inglewood’s Chief.

Seabrooks is no stranger to Santa Monica. She joined the SMPD in 1982 and worked her way up the ladder from patrol officer to background investigator to training officer, and then onto academy drill instructor. In 1990, she was the first woman to be promoted to serve as a police sergeant.

She continued this trend of “firsts” when, in 1996, she was promoted to police lieutenant, and later in 2000, to police captain.

The 50-year-old plans on completing her career at the SMPD.

She said she would establish short and long term goals for the department once she had settled in.

“Right now my goal is to learn as much about the organization as I can by meeting with staff to talk about what they’ve been doing and to equally share my insights and general philosophies about service delivery of policing,” she said.

“Once I have a clear understanding of where the organization is as of this moment, I will be able to sit down and craft some more thoughtful responses. I say that, but then I say I’m very clear the goal is to fight crime.”

When asked about her managerial style, she said she was a collaborative leader.

“I take into consideration not just the opinion of the people who are sitting on the same floor as I am, but I walk around and talk to people at various levels of the organization and talk to people on the outside because how we think about things may be crafted slightly different from the perspective of someone who is the subject to the services that we provide.”

She said she was direct when interacting with her staff, which she said was sometimes hard for some people to get used to.

“At the end of the day, I’m a police officer who has become an executive,” she said. “With that comes a level of supportive confrontation. I have an expectation that people will be responsible and accountable and when they’re not, they should be ready to give an account of why not.”

She said she would also address the department’s response to criminal behaviors that affect the homeless population.

“I don’t believe in criminalizing the homeless,” she said. “Homelessness, in some people’s opinion, is a choice and in other people’s opinion it is a circumstance brought on by the economics, and for other people it just may be it’s what happened to them. No matter how people come to be homeless, the police department’s response has to be measured and compassionate.”

She said law enforcement was sometimes an unpleasant business, but she said she would work towards creating a department that deals with people humanely and with dignity.

“Sometimes in the haste of the moment, the niceties sometimes get lost, not the constitutional commitment, but the niceties and the pleasantries sometimes get challenged a bit,” she said. “My job is to make sure we keep our eyes clearly on the ball about those things and that happens through direct engagement with staff, very clear expectations, a re-affirmation that this organization is committed to following its policies while keeping an eye on what are the best standards and practices in the industry when juxtaposed against community expectation.”

In terms of changes since she left for the City of Inglewood almost five years ago, Seabrooks said the organization was somewhat larger and organized differently.

“When I left, some were police officers, now they are sergeants,” she said. “There were sergeants that are now lieutenants. So that’s really good to see there’s that consistency of evolution. And then as I review documents associated with the operation of the police department, there’s a very keen sense of professionalism and there’s a very keen sense of understanding processes and the support that happens out in the field.”