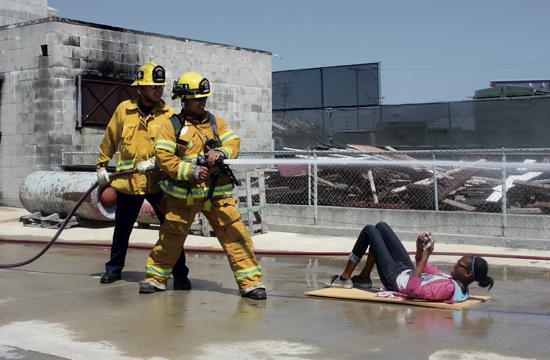 In the age of Instagram, Facebook, and cell phone cameras, shooting and sharing pictures has become easier and more accessible than ever.

To harness kids’ increasing interest in taking photos, the Santa Monica Human Relations Council is sponsoring the fourth annual Kids with Cameras program, where local youth from the Boys and Girls Club, PAL, and the YMCA participate in a six-week summer course that teaches photojournalism techniques and fosters community awareness.

“The value of this particular group is that we’ve got three different service organizations: the Boys and Girls Club, the ‘Y’, and PAL, and they’ve got kids from different areas of the city, and they all meet together with one common cause,” program mentor and photographer Nick Steers said.

The course kicked off Wednesday at the Santa Monica Fire training academy. It gave the kids an opportunity to participate and take pictures of fire drills and demonstrations such as using a fire hose and climbing a tall ladder to the top of a building.

“We wanted the three different youth groups to be able to interact, get to know each other the first day, and all be challenged on the same level and learn the first day taking pictures,” Donna Gentry, member of the Human Relations Council, said.

Each year’s program has a theme – this year it is “faces and places.” In the past, the class has focused on the mid-city, farmers markets, and public art. The current theme will find the kids at locations all around Santa Monica, from Palisades Park to the Annenberg Beach Club to the Museum of Flying.

“Each week we’ll talk about different issues, such as homelessness, visitors from all over the world, and the kind of melting pot the Promenade is. So they get to learn a lot of things about the city of Santa Monica,” Gentry said.

“Being that the program is sponsored by the Human Relations Council, which is all about social justice and community, it gives us an opportunity to share this with the youth through their photography.”

While that is one aspect of the program, there is certainly no shortage of photography wisdom being imparted. The program has several mentors, all of which chime in while the kids are taking photos, telling them not to be afraid to get close and encouraging them to try creative shots and angles. They also offer constructive feedback afterward, and help the kids choose the best photos for a final scrapbook. The session also culminates in a photography show at the end of August.

Retired doctor, lifetime photography hobbyist and mentor Charles Haskell said that there are three main things he tries to teach the kids: proper technique, a good eye, and how to share the finished product.

“Mostly we’re trying to help them develop an eye, and to develop a sense of recording stories, of photojournalism. So it’s a question of taking pictures to record a story, or tell a story,” Haskell said.

“All of the kids now are digitally proficient. They all use social media sites…if they don’t have a camera phone, they have access to a phone with a camera, so they’re used to taking pictures and sending them to their friends,” Haskell said. “I think that they’re just much more sophisticated.”

Frederico Lynch, 13, an incoming Samohi freshman, said he really enjoyed the afternoon because it was new for him.

“It was really interesting. I’ve never taken pictures with a group before, so it was a new experience,” Lynch said.

“I’ve been using Instagram and I wanted to learn how to take better pictures because it’s kind of inspiring.”