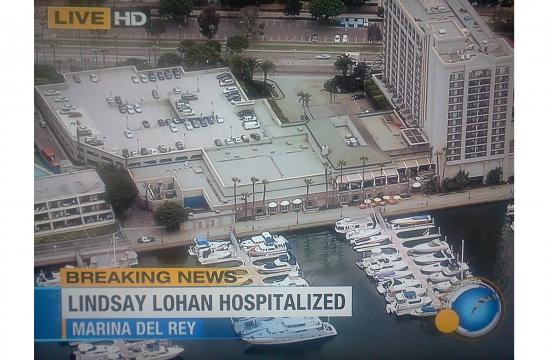 ABC7 reported earlier today that actress Lindsay Lohan had been taken by paramedics to a hospital after being found unconscious in the penthouse at the Ritz-Carlton Hotel in Marina del Rey, but that was not the case.

According to celebrity news website TMZ, Lohan had been shooting almost non-stop without sleep for two days and was staying at the hotel to get some shut eye as she had been shooting parts of her movie “Liz and Dick” near the hotel.

When paramedics arrived they determined nothing was wrong and left without transporting her to hospital, TMZ reports.

A Lohan rep told ABC7 that she was on set last night at 7 p.m. and worked through the night until 8 a.m. this morning.

“She took a nap before shooting her final scene. Producers were concerned when she did not come out of her room and called paramedics as a precaution. Lindsay was examined and is fine, but did suffer some exhaustion and dehydration,” the rep said.

The incident comes just one week after Lohan was involved in a bad car accident on the Pacific Coast Highway in Santa Monica after the Porsche she was traveling in was totaled in 1100 block of the PCH at about 11:42 a.m. Friday, June 8.

The black Porsche that was being rented slammed into the back of a dump track that was also traveling northbound on PCH.

Santa Monica investigators are attempting to determine whether or not Lohan was the driver of the Porsche at the time of the collision.

Lohan and her assistant who was also in the Porsche were both determined to not be impaired and were transported to a local hospital for treatment of minor injuries. They were later released.