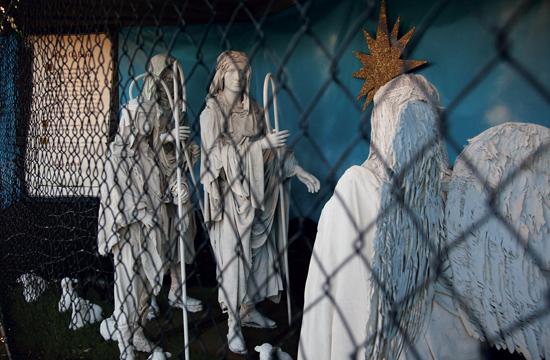 The Santa Monica City Council unanimously voted Tuesday night to prohibit erected structures to be on display at Palisades Park. Accordingly, a Christmas tradition that has existed in Santa Monica decades before many current residents moved into town will no longer be allowed to take place.

The issue almost immediately becoming tense with differing groups hoping to put up a winter display of some sort during the Christmas season, City Hall began to contemplate whether to eliminate its exception altogether and extend the strict prohibition against private displays in public spaces within Santa Monica at Palisades Park.

“Some argued that the ‘traditional’ Nativity scenes, which had been in the park for sixty years, must somehow be preserved,” staff said. “Others favored the lottery system for allocating spaces but advocated standards for displays that would ensure aesthetic merit. Some opposed all private displays on public space. Many felt that the juxtaposition of religious and anti-religious displays was a distressing symbol of conflict inconsistent with values of peace and harmony that many associate with the holiday season.”

On Tuesday, council members finally concluded the six-month consideration of the issue with its unanimous vote to indeed eliminate the exception and prohibit a private display at a public park.

After the ordinance’s second read on June 26, churches, synagogues, mosques, temples, or any other religious or non-religious entity will not be allowed to erect a winter display of any kind at Palisades Park.

Of course, the proposed ordinance did not easily come to a vote. There was testimony on both sides of the issue making compelling arguments as to whether or not council members should eliminate the longstanding exception.

Many believed the nativity scenes and other religious displays promoted community, opponents of the public display ban argued. But most importantly, the ordinance’s opponents viewed the ban as an infringement upon religious freedom and a form of fear.

“Being an American gives me the right as an individual apart from any religious preferences to live in a community of my choice with other people. It, however, doesn’t give me the right to persecute anyone else’s choices for themselves, which, to me, means despite the fact that I’m not Jewish, I don’t have the right to tell anyone they can’t display a Menorah,” Santa Monica resident Patrick Potter said.

Conversely, those supporting the elimination of the exception say too many groups are now competing for space at Palisades Park, which could lead to trouble. Even more, employing a lottery system each year would be expensive and keep the door open for unhappy groups and expose the city to potential lawsuits.

“The primary role of government is to protect religious freedom … (and) freedom from religion,” Manhattan Beach resident and Santa Monica patron Aliyah Levin said. “The city’s placement of the nativity scenes has served as an endorsement of private religious expression. Religion is a personal conscious, not civic display.”

Council member Terry O’Day, who said he enjoyed the nativity scenes, worried a negative competition would arise if a lottery system were to remain in place.

“I feel like we are setting up a ring for a competition – one that is getting nasty, and that is certainly not in the Christmas spirit,” he said. “There are other ways to celebrate faith or non-faith.”

Then there was the legal argument presented by City Attorney Marsha Jones Moutrie. In her statement to council members, Moutrie said the city had the right to eliminate the Palisades Park exception, adding that religious groups still had a means to express their views. For example, winter displays could still be erected if they were attended at all times. Also, churches could pass out leaflets.

“The city can certainly, legally, ban all unattended private displays in the public parks. We believe there are several cases that support that, and we do not believe there are any to the contrary,” Moutrie said.

The debate over nativity scenes and winter displays arose last year when there was a sudden increase in groups seeking out one of the 21 spaces available for winter displays at Palisades Park. Up until last year, there was little to no competition for the 21 spaces, which were mostly occupied by a coalition of 14 groups who erected the nativity scenes at Palisades Park.

According to Community and Cultural Services Director Karen Ginsberg, City Hall prior to 2011 only received two to four applications for the 21 display spaces at Palisades Park.

However, last year’s increase in demand for the spaces forced City Hall to resort to a lottery system in an attempt to determine, as unbiased as possible, which groups would be entitled to one of the 21 spots. Many of those spots went to atheist groups, much to the chagrin of the religious coalition.

Ginsberg added the lottery system required staff to put in hundreds of hours to facilitate.